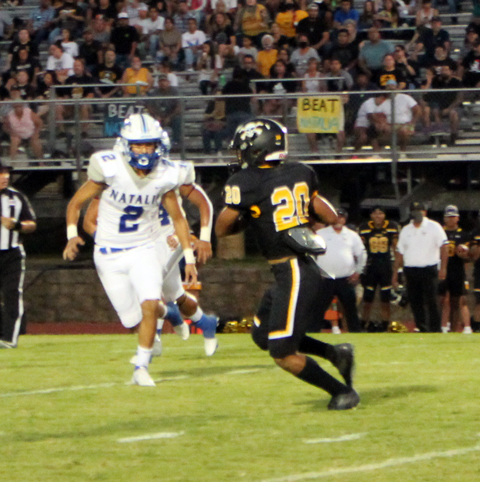 The Natalia Mustangs (3-1) will travel down IH-35 to Frio County to battle the undefeated Dilley Wolves (4-0) in the District 15-3A (Div.I) opener this Friday at Gosh Field. It is no secret; Natalia has a huge dark cloud hanging over their head dating back to 1989, which is the last time a Natalia Football team has won on the road vs. the Wolves.
Natalia Head Coach Ilyan Martinez and his squad are determined, to be well prepared for a four quarter war this Friday night as they begin their quest for not only another playoff appearance, but a district title hunt starting with game #1 vs. the Grey Wolves of Dilley High.
“We know it will be a challenge to win our district opener on the road,” Coach Martinez said. “We have to have a great week of work and have championship preparation. The fact that we haven’t won in Dilley since 1989 tells us how hard it will be for us to win, so preparation and focus is that much more important this week.”
Dilley Outlook
Coming into the 2021 season, the Dilley Wolves were riding an 18 game losing streak as former longtime Dilley Assistant then Head Coach David Silva returned to Wolf Country. Silva re-vamped the Dilley offense which is some-what similar to their old glory days and has resulted in the Wolves getting off to an impressive 4-0 start. Dilley has picked up the following victories: Sabinal 21-0, Charlotte 39-0, Cotulla 9-6 and LaPryor 48-8.
The Dilley Wolves welcomed back five starters on both sides of the football to a team that was picked by most to finish on the bottom of 15-3A (Div.II) this season.
Silva had the following to say about his program thus far: “We have done a great job of keeping it simple and we have utilized several schemes to help benefit our personnel,” Silva stated. “Vicente Correa, Duece Cano, Clay Tom Hurt, Derik Garcia and Santi Reyna have really provided good senior leadership for our team thus far.”
Offensively, Dilley is going to run the double slot gun offense with a lot of run game with some play action according to Coach Martinez.

“Their QB is an athlete who can make a lot of plays with his feet. We will have to account for him on every play. They control the ball game and we need to find a way to create turnovers and give our offense the ball.”
Defensively, Dilley is going to run a split with a cover 3 behind it.
“They have a big defensive line with some pluggers at LB,” Martinez said. “Their secondary keeps everything in front of them and runs to the ball well. We have to make the most of every possession, because with the offense they run we may not get the ball back for a while.”
“We will have to eliminate turnovers and big penalties and make tackles on first contact as well as win the Special Teams portion of the game to have a shot,” Silva said.
Natalia Outlook
So far this season, the determining factor concerning success starts and ends with the play of the offensive and defensive lines and this Friday that will be huge once again.
In the four games for Natalia, three of the boys in blue won the war up front which led to offensive and defensive success and the one game in which they lost, Cole won the war up front overall.
Friday night, in order to slow down the Dilley offense which isn’t a typical offensive scheme Natalia faces, this will be key.
“We know it will be tough and we have been working all year to compete for a gold ball and we know that starts Friday night in Dilley,” Martinez said.
One thing that has been a huge plus for Natalia is the number of offensive and defensive weapons the Stangs have to work with. Despite holding a streak over Natalia dating back to 1989 (they haven’t played every year during that time, but the majority of the years) Coach David Silva realizes Natalia’s talent. “Natalia will definitely be our biggest test thus far as well as the rest of our district,” Silva said. “Natalia will come in looking to stop that streak and they are coming in as 19+ point favorites, so we will also use that as a motivator along with the lop-sided scores from the past two seasons.”
Game time is set
Coach Martinez and the Natalia Mustangs are asking the entire Natalia Community to make the trip down to Dilley Friday night and cheer them on as they look to snap a drought dating back to 89′.
Kickoff is set for 7:30 p.m. at Gosch Field and keep an eye out on Natalia ISD Social Media pages for information on how to buy tickets to the contest.
Come Early, Be Loud, Wear Blue and Cheer the Mustangs on to victory! The DROUGHT will end Friday night in Frio County.
By Eric Smith
Staff Writer