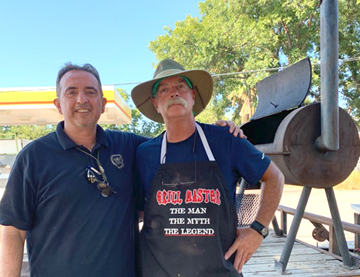 Two local men, TJ Richardson of Devine and Dave Gast of Natalia, answered a call to help lift spirits and provide a hot meal to 230 men and women working day and night to secure our border and deal with the unprecedented situation in Del Rio.
“We could see hundreds of CBP, DPS, Military members and law enforcement officers working in the rea and it made us feel like our efforts were not near enough to meet the demand. It was if we were trying to put out a brush fire with a glass of water,” Richardson wrote after returning home Monday evening, encouraging citizens to volunteer any effort they can toward the crisis.
Richardson gave a recap of what these two men were able to do and what they saw.
“Our trip to Del Rio started as a challenge to Congressional Representative Tony Gonzales (US 23rd) to rally other Texas representatives, State and local officials to get control of the border crisis as it neared the number of 14,000 illegal migrants that had crossed into the US at the Del Rio International bridge.
“Michael Blair, staff member of Tony Gonzales’ office, contacted me and assured me that he and Rep. Gonzales had been at the location for several days trying to get a handle on the situation. Michael Blair then challenged me as to what I was willing to do to make a positive impact on the situation.
“Not knowing what I could do, he put me in contact with Jon Anfinsen, CBP Officer and National Border Patrol Council representative for the Del Rio Sector. When speaking to him, he relayed the dire circumstances the CBP officers were working under; overwhelming crowds, long hours day after day in the Del Rio heat, along with critical shortages of lodging and meals for CBP, DPS, law enforcement officers, and military personnel.

“He relayed that the moral and spirit of the CBP personnel was reaching a critical low and that they were feeling as if they were abandoned in this effort. He mentioned again the need for food. I then reached out to citizens of our Devine/Natalia through Facebook and text asking if anyone could go with me and help support an effort to bring meals to as many of the personnel there as possible. Dave Gast, USAF Retired and citizen of Natalia said he would buy food AND go with me. Other citizens quickly responded with funds to buy food.
“On Sunday morning (09-19) we left the Devine Walmart with two truckloads of food with a large BBQ pit on a trailer and headed to Del Rio. Once there, Jon Anfinsen (CBP) set us up in a location right outside the main entry point to the holding area. As we began to prepare food, other citizens who had gathered in the area saw our efforts and began to help out. Robert Duran, CBP Officer and Vice President of the National Border Patrol Council, tried to get personnel working inside the holding area relieved of duty long enough to come out and get a meal, but the crowds of migrants and working conditions would not allow it.
“People we didn’t even know went into Del Rio in search of “to go” containers so that food could be taken into the compound. For six hours, we cooked, packaged food and drink, and had it delivered by Border Patrol officers into the compound for the personnel who could not come to us. Those members of the military, DPS, and local law enforcement officers who could come to us ate and then took meals to their work partners. In all, we prepared 180 hamburger plates and 50 hotdog plates complete with cold drinks and chips.
“At one point, a member of the CBP came up to us and asked us why we were doing this. We did not realize it at the time, but later we discovered it was Chief Raul Ortiz, Chief of the US Border Patrol who had come down from Washington, DC to work the situation himself. Members of the press who had been there covering the crisis were invited to get a meal as well and many did. They also stated that they would spread the word through their channels to encourage citizens to volunteer any effort they could toward the crisis.”