As related by JodiAnn Dzierzanowski, Principal of Devine Learning Academy, and edited by Kathleene Runnels
Devine Learning Academy graduate, Brandon Lee White, joined the Armed Forces and left for basic training on Monday, October 31, 2022. Brandon said that he wouldn’t have been able to complete high school without the help of the Devine Learning Academy; traditional school just wasn’t for him. Brandon stated, “I was very grateful for the opportunity the Learning Center gave me; otherwise, I never would have been able to join the Army.” He added “I was able to work around my schedule and complete my coursework at my pace.” Brandon graduated in July 2022.

END_OF_DOCUMENT_TOKEN_TO_BE_REPLACED

One might imagine that many of today’s young people, and perhaps not so young, don’t fully understand the effect the wars of the twentieth century had on most of the citizens of the United States, going back as far as the onset of WWI. For example, consider the Selective Service, or, the draft.

On May 18, 1917, (six weeks after the U.S. formally entered the First World War) President Woodrow Wilson signed the Selective Services Act in preparation for U.S. involvement in World War I. At the time, the U.S. had a standing army of just over 100,000. The registration of men between the ages of 21 and 36 began one month later. Interestingly, Secretary of War Henry L. Stimson began drawing draft numbers out of a big glass bowl, and as the numbers were handed to the President, they were read aloud for public announcement. Within a few months, 10 million men across the country had registered in response. By the end of WWI, November of 1918, 24 million men had registered; of the those who eventually served in the war, some 2.8 million had been drafted. The draft was then dissolved after WWI. (Historyonthenet.com)

Then, in September, 1940, Congress passed the Burke-Wadsworth Act, which imposed the first peacetime draft in the history of the United States. By October of 1940, all men between the ages of 21 and 35 were required to register with their local draft board. Subsequently, 66% of U. S. Armed forces members were drafted during WWII.

Reflecting next on the ultimate sacrifices of these wars, during WWI, the Allies (The Triple Entente – consisting of France, the United Kingdom, Russia, Italy, and Japan) lost about 6 million military personnel. The Central Powers – Germany, Austria-Hungary, the Ottoman Empire, Bulgaria, and their colonies, lost 4 million. (WikipediA)

Then came WWII, which has been listed as the bloodiest war in human history, killing over 60 million people – 3% of the entire world population in 1939 died in the war. It is estimated that approximately 407,000 American military died in WWII and 12,000 civilians (due to crimes of war and military activity). The total death count for all Americans: 420,000. (Historyonthenet.com) The wartime draft then expired in 1947 but was reinstated the following year.

And then there’s the Korean War, 1950-53. Because of the need for additional soldiers during this war, the minimum age for the draft was lowered to seventeen, and men were to serve an average of two years, with men who served in WWII being exempt. During this war, the American casualties reached almost 40,000, with more than 100,000 wounded.

In addition to the above sited ultimate sacrifices from the wars of the 20th century, folks at home deeply felt the effects from the war. During WWII, not only was the workforce comprised of 36% women, (my mother, Estelle Van Treese, taxied airplanes at Duncan Field, which merged with Kelly Field in 1943) but families had to cope with many shortages of basic materials such as food, shoes, metal, paper, and rubber. While the Army and Navy needed these supplies, civilians at home needed them as well. Thus, the federal government established a rationing system that impacted virtually every family in the United States. Points were issued to each person, even to babies, which had to be turned in along with money to purchase goods made with restricted items.

For example, in 1943, a pound of bacon cost about 30 cents, but a shopper would also have to turn in seven ration points to buy it. These points came in the form of stamps that were distributed to citizens in books throughout the war. Tires, gasoline, sugar, coffee, meats, fats, canned fish, cheese, canned milk, were among the most necessary products rationed. (The National WWII Museum)

I should add that Bill Bain recalled his dad saying that he was afraid his “bald” tires might not make it to the hospital when Bill was about to be born. People had to keep their automobiles and tires indefinitely, and the government even told Americans to keep track of their tires’ serial numbers in case they were stolen.

Some of the shortages continued to be felt even after the war ended and rationing came to a halt, due in part to “years of pent-up demand.” (The National WWII Museum) My cousin, Gayle Van Treese Brice, whose mother was gone and whose dad was serving in the Army in occupied Japan, was being raised by our grandmother. Gayle recalls the two of them going to the grocery store and trading eggs for groceries, being careful not to go too often to save on tires and gas. Also, Grandma made Gayle’s clothes from feed sacks, as she also did for me!

I have another cousin who was born in 1939, and her father, my Uncle Morris, died in a plane crash in Berlin while serving in the Air Force. She never knew him. Then there was a high school friend who was born during WWII and never met her father, who was killed in Europe. How sad for her and her mother. These types of stories describe a tragic number of families; or, in many cases, even nowadays following more recent conflicts in the Middle East, countless soldiers met their babies for the first time following deployment. Imagine how this scenario can create stress and conflict in the family unit, not to mention how mentally and often physically damaged these soldiers were when they returned.

On a lighter note, but also worthy of reflection, here are some anecdotes to which some may find enlightening and to which others may be able to relate.

Because most men entered the service during those eras of the mandatory draft, it could not be assumed that all of these servicemen were of high standing, or good guys. Thus, as a teen, my mother cautioned me, “Do not make eye contact with the ‘fly boys’.” Living in San Antonio at the time, we young girls frequently encountered airmen in downtown San Antonio. In those days, Houston Street was the place to shop. We girls would take the bus downtown, walk down from the Hertzberg Clock on the corner of Houston St. and N. St. Mary’s St. to Joske’s Dept. Store, then walk back along the other side, usually stopping to get a hamburger at the Manhattan Café next to the Majestic Theater. (I hope that paints a vivid picture.) As we walked along, we often, very often ran across a group of airmen on leave from Lackland – the Gateway to the Air Force. So, Mother said it was best not to acknowledge them, even when they gave us the “wolf whistle.” And that they did do!

I well recall riding home with a fellow I had met at church – namely, Franklin Runnels – and, taking a circumvented route, we drove up to the Jet Drive-In on SW Military Dr. He asked me, “Do you like the Jet?” Naively, I said that I did not. You see, my mother had told me not to go there with my friends because that’s where the “fly boys” from Lackland hung out. LOL. So, we went somewhere else.

One time a friend and I were hanging out on the steps of the downtown Herman Sons Bowling Alley, where my mom and dad were bowling, when a couple of airmen came along. They asked us what there was to do in San Antonio, and we said that there wasn’t anything, really. (This was long before 1968 when Hemisfair made the River Walk famous!) Then I felt guilty for exchanging a conversation with these guys.

Aside from these lighthearted snippets, most of us alive today can only read of the effects the wars had on our men and women who served and on the families at home, or we might be able to recall stories told by our parents and grandparents, who undoubtedly held deeply embedded memories. History explains that the American family dynamics were changed forever, with the vast changes in wartime society and domestic adjustments evident today. (Www.u-s-history.com)

The Wreaths Across America theme for these articles is to “Remember the fallen, Honor those who serve, and Teach generations about the value of freedom.” Devine’s ceremony and placement of wreaths on Veteran graves at St. Joseph Catholic and Devine Evergreen cemeteries takes place on Saturday morning, December 17, at 11:00 o’clock. 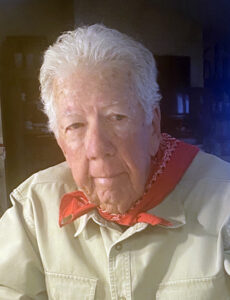 On Thursday morning, September 9, 2021, Wilma White went to be with the Lord. END_OF_DOCUMENT_TOKEN_TO_BE_REPLACED

Victoria Flores Michalchuk, first featured in Glimpse in 2014, says she is “driven by my interest to make the world a healthier place.” END_OF_DOCUMENT_TOKEN_TO_BE_REPLACED

In recalling her childhood, Nola Alexander Hanson recalls the old saying, “It takes a village to raise a child.” END_OF_DOCUMENT_TOKEN_TO_BE_REPLACED

The following story is written by Bonnie Bain
END_OF_DOCUMENT_TOKEN_TO_BE_REPLACED