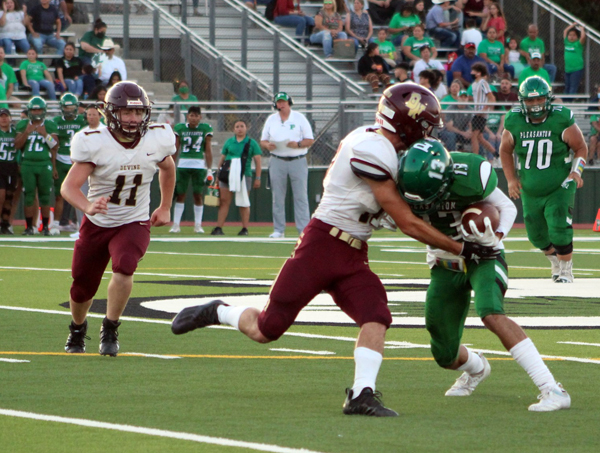 According to the old saying “Any Given Sunday”, no matter the odds any NFL team is capable of beating another on any particular weekend. Well, Luling’s high school football team has tasted the joys of victory only once over their last 35 ballgames and with the Horses looking to rebound from last week’s loss in Pleasanton, this set of Eagle football players may take on the mantra of “Any Given Friday” for their rallying cry.
Luling’s one and only victory not only this season but since late 2017 was a 17-7 decision over Weimer on September 10. The Eagles lost to San Antonio Cole last Friday 13-18.
Devine is lucky to have Andy Zapata and James Ornelas keeping stats for the Warhorses. Stats for Luling are few and far between. Several attempts in DuckDuckGo and Google, and of course the San Antonio Express News, have little information on player or team stats for Luling.
Gomez’s Eagles scout, Part II
For the second week in a row, Devine faces an Eagles-mascot squad in Luling. Head Coach Paul Gomez gives his take on what the Eagles have to offer and what his team needs to do in order to bounce back in a big way for their Homecoming crowd.
“Luling hasn’t had too much success this year but they definitely have some talented kids over there. Their QB is a fast kid that creates space and time with his speed. They have a big, quick running back and speed seemingly everywhere. Their line is big and yes they will be bigger than us on the line, but that is nothing new. We have to win battles on the line with technique and leverage. Defensively we will see them in a 6-2 look with their safeties up close, and we will also see them in a 4-3 look.”
Gomez believes the Eagles “will be a good test for us and we just need to worry about us getting better and fixing our mistakes. That’s the only thing that we can control.”
Kickoff is set for 7:30pm.
By Jerel Beaty
Staff Writer