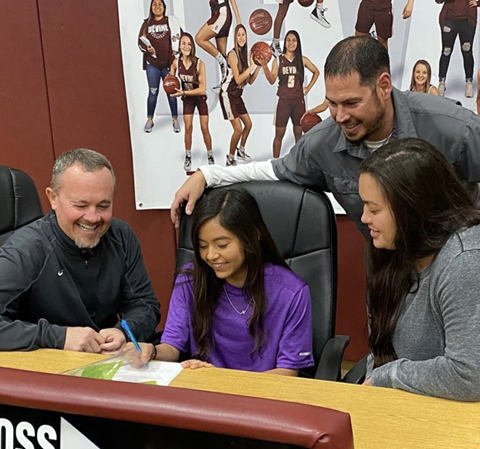 On February 19, dual-sport four-year varsity athlete Esperanza Mendoza signed on to run Cross Country and Track for Hardin-Simmons University in Abilene. Surrounded by family, friends, coaches, and both current and former teammates “Espi” put her name on the dotted line to continue her athletic career at the collegiate level.
I reached out to Hardin-Simmons Head Cross Country and Track coach Zach Leggett for a comment on what it means for his program for a person of Espi’s caliber to join an already outstanding program.
“We are really looking forward to having her in our group,” he said. “The first thing that stuck out to me when I was talking to her is that she was very respectful and courteous. We have a very young team here (4 freshman were All-Conference at the 2019 ASC Championship meet where we won our 2nd consecutive conference championship) so we are looking for people that will work hard and have a good attitude to build around those ladies we currently have on the roster. She seems to fit that bill. It is also hopeful that she has good times in events from the 400-3200; she seems to be very versatile.”
Respectful. Courteous. Work hard. Good attitude. The words Coach Leggett used to describe Espi demonstrates he already has complete understanding in the type of person and athlete he has recruited to unite with next year’s returning lineup.
Espi’s time as an Arabian runner produced many championship performances both on the athletic field and in the classroom.
In Cross Country, Espi was Newcomer of the Year for District 29-4A as a freshman. She was a key member of the most recent back-to-back team district championships and well as a four-time regional qualifier. Espi made the All-Region 4A team in 2018 and qualified for the State Meet in Round Rock along with her fellow teammates.
This past season, Espi finished fourth overall at district earning her Unanimous All-District recognition. Espi was also Academic All-District.
The most important accomplishment in her XC career, in my opinion, was for her recognition in the classroom as she garnered Texas High School Coaches Association Academic All-State.
In Espi’s second sport, track, she was a member of the past-three district championships that included winning individual championships five different times in either the 800m, 400, or Mile Relay. As a 10-time Area qualifier among her three events, Espi advanced to Regional in each of her first three years with her senior year still on the horizon.
Espi will make her second state appearance in April, but not in one of her two sports. Espi advanced to State in FCCLA competition after finishing fifth at Area.
All told up to this point in her final year as a Devine Arabian, Espi has been a key member of six district team championships, tallied five individual district or post-district championships, has advanced to eleven Area competitions, to eight Regional competitions, and has made two State appearances.
Hardin-Simmons and Coach Leggett are getting quite the competitor in Ms. Mendoza. Coach Leggett and Assistant Derek Footer, recently recognized as American Southwest Conference Coaching Staff of the Year for their Division III conference, will undoubtedly push Espi to become even better in all aspects of her collegiate career.
What Espi has to say
“I never thought throughout high school about running in college. Then as my senior year and XC season was ending and I thought ‘Wow! I’m really going to miss this.’
Running is a reliever to me. It helps with stress because I can go on a long run and release all my thoughts and feelings. It helps me figure things out when I face circumstances in life. I don’t know where I would be without running.
In September a friend of mine who is already in college reached out and asked me, ‘Hey, have you thought about running in college? My coach here thinks you would be a great fit.’
After I applied to the school, more schools kept reaching out about running and I was shocked. I talked to (Head Devine Cross Country) Coach Beaty and he said ‘pick where you know is right.’ Honestly, I did not know what was right, I was lost and stressed and didn’t know what college to choose.
It was between Hardin-Simmons and Mary Hardin Baylor. I asked people for their opinions and they said ‘it’s not up to us; it’s how you feel once you visit the school. You’re not going to know until you get that feeling and then you’ll know that’s where you belong.’
I visited the campuses and I felt I belonged at HSU! The campus is beautiful and small; that’s when I knew it was perfect. I texted the coach (Coach Leggett) and he was excited. Ii let Coach Beaty know and he was beyond happy for me.
I am grateful. I just want to thank my teammates and past teammates, Coach Beaty, Coach Thompson, Coach (Lon) Cozby (both old and young), and Khera Vay for all they have done.
I also want to thank my family and friends for supporting me in every way. I can’t wait to start my new journey.
God has been here for me every step of the way and I am thankful!”
Final note
I am always happy when good things happen for kids who work hard, are respectful to their peers, and do what’s right at all times. Espi is definitely one of those kids who deserves these blessings she is receiving. Her Arabian teammates and high school coaches will miss her leadership qualities as well as her contagious personality once the 2020-2021 XC and track seasons get underway.
Best of luck, Espi!!!
By Jerel Beaty
Staff Writer