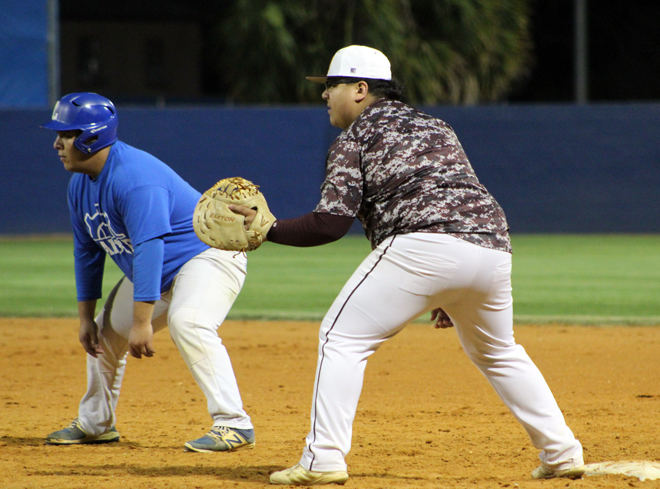 The Warhorses baseball is up and running with a couple of scrimmages and the 2020 Warhorse Baseball Skills Challenge complete for the season. They fell to SA Edison last night in their first game of the season 1-9 at home.
In the Home Run Derby, Josh Weber took all three titles of Home Run Derby Champ, Arm Accuracy Champ, and Strongest Arm Champ.
Both the Varsity and JV Warhorses faced SA Lanier, SA Harlan, Pleasanton, and SA Kennedy in their scrimmages. “We used our scrimmages to see where some of our players would fall in this year since we only have three returning starters. Our first scrimmage vs Lanier went as good as it could for a first scrimmage. Our last three scrimmages were rough. Our inexperience at the varsity level for these kids really showed. We did see some good things in these scrimmages but still a long way to go. The good thing about these kids is that they come every day willing to get better and have great attitudes. Our goal is to be playing our best baseball come district time.” Coach George Villa
Monday night against SA Edison, the Warhorses opened the first two innings with no runs scored but in the third Edison scored three runs then hit a home run with two runners on base. They would score two more in the 5th and four in the 6th to win 9-1. Devine’s single run came late in the 7th when Christen Gerlach stole home while Clayton Brown was at bat.
“I feel like we improved in one area which is a big area. Our three pitchers threw strikes and forced contact. Our defense however didn’t hold up too well. Again, I’ve got some inexperienced players that are now having to play big rolls. They’ll get better and make those plays as the year goes along. Offensively, we struggled as a team as well. We are striking out way too many times. We will continue to push these kids to get better and keep raising the bar.” Coach Villa
The Warhorses will compete in the Navarro/Seguin Tournament this weekend and then the South Texas Slug Fest March 5-7. The JV will head to Floresville for their first tournament this weekend.
By Dicy Chambers
Sports Writer