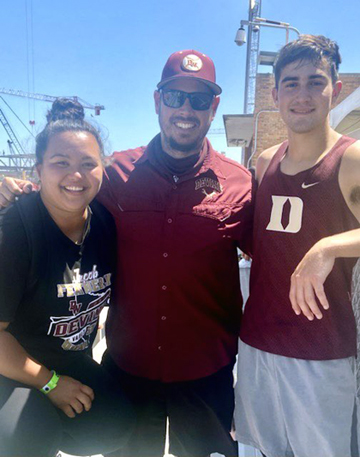 Making the state track meet in Austin is no easy accomplishment for any Region IV competitor. Making it to state as a Regional Champion is even more difficult, but that is exactly what Warhorse pole-vaulter Jacob Featherly accomplished as the last Devine track and field athlete participating in this 2021 season.
Featherly broke his own school record before it even had a chance to get a little dust on it. At Area, Featherly vaulted 14’4” to top Paul Jett’s 14’3” vault in 1973.
At the University Texas last Thursday, Jacob posted a new school-record 14’6” to place sixth overall in his final competition as a Warhorse track athlete.
“The trip was a lot of fun,” Head Coach Lon Cozby started saying about Jacob’s state experience. “He was excited and relaxed the whole time. He did just what we talked about, go out and clear bars (which he did on his first three attempts) and try to set a record (which he did in his last clearing-attempt)”
Getting the school record did not happen without a little nervousness and tension along the way. That nervousness and tension was not necessarily felt by Jacob, however, but felt by those who witnessed a first for him during his vaulting career.
“Just a fun fact, last week Jacob and I were talking at practice and Jacob mentioned to Coach Hannah Thompson and I that he had never broken a pole. He then said, ‘How funny would it be to go to state and break one there?!’”
Be careful what you wish for!!!
“On Jacob’s 3rd attempt at 14’6 his pole cracked into 2 pieces,” Cozby continued. “Everyone kind of freaked out but once he landed I started cheering and I could hear Bri Bowyer cheering too! Many people were confused but breaking a pole does not count as an attempt so he got one more try. After a few minutes to recover, he went and grabbed his bigger pole and cleared another school record, in dramatic Featherly fashion.”
Looking back
The Warhorses won the District 29-4A Championship in late March amassing 271 points in the process. They followed that up by capturing the Area Championship as well in early April, sending 20 participants to Regional in Kingsville and Featherly to State in the process.
Prior to Regional, the Warhorses took home the championship plaque in six of their previous eight invitationals and finished as team runner-up in those other two meets.
That is a lot of hardware to collect in a season that began under a COVID19 cloud, but culminated under the sunny, clear sky in Austin.
Throwing it down
Shot Put throwers Geoffrey Seal, John Schnautz, and Christian Gerlach advanced to Regional with the trio scoring a combined 99 points at district, and another 99 at area.
Evan Priest qualified for Regional as well in Discus. Evan won district and placed at area to punch his ticket to Kingsville.
“This is the most number of throwers we have ever taken to regionals,” said thrower’s coach Devin Rotramel. “I am very happy with their efforts and work that they put in during the season.”
Geoffrey, John, Christian, and Evan are all seniors and have definitely left their mark on the Warhorse track program with numerous gold, silver, and bronze medals over the course of their high school careers.
Rotramel is going to miss this group of guys without a doubt and past on his final comment saying, “I’m proud of these kids and wish them the best in their futureendeavors.”
4A results
1st Caleb Murdoch-Argyle 16’3”, 2nd Dylan Truss-La Grange 16’0”, 3rd Montana Welch-Taylor 15’9”, 4th Emmanuel Ibanez-Dumas 15’6”, 5th Preston Pilgrim-Pleasanton 14’6”, 6th Jacob Featherly-Devine 14’6”, 7th Mitchell Thompson-Argyle 14’0”, 8th Braden Bradshaw-Van 13’0”, 9th Bowman Grace-Lindale 13’0”.
By Jerel Beaty
Staff Writer