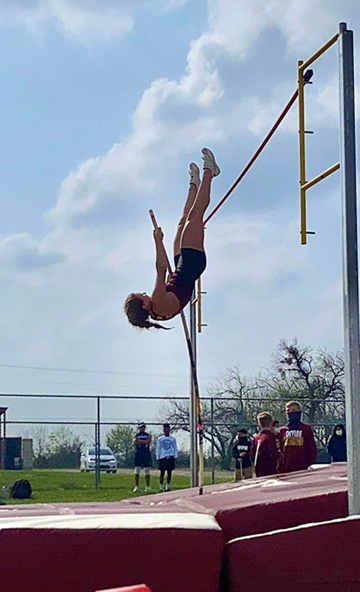 Arabian polevaulter Bri Bowyer accepts nothing less of 100% from herself regardless the sport or activity in which she is competing.
“In the past two weeks Bri has tied the school record (9’6”), tied it, broke it (9’“9), then broke it again (10-0) this past week!!! Bri is a great competitor,” Cozby stated. “She really took her senior year seriously and set out goals that may have been impossible to some, but not her. She told us last year she wanted to go to state in XC, set a personal best in the mile, and set the school record in PV. She has already taken care of all those. In addition, she has a great relationship with her position coach, Coach Thompson. Both Coach Thompson and I are extremely proud of what Bri has done thus far. I am anxious for District and beyond and see her continued progress. And, success breeds success. Bri has pushed the boys to new heights and they all feed off each other. Coach Thompson has a great Pole Vault crew!”
Best of luck to Bri and the rest of the Arabian track team in district and beyond!
By Jerel Beaty
Staff Writer