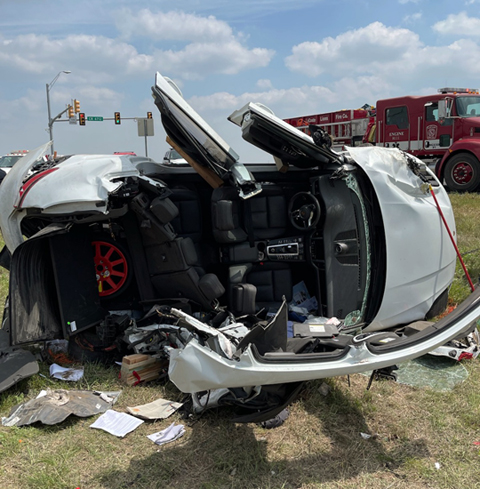 What a tragedy. Accidents like this remind us all not to take a second for granted. A man, wife, and son traveling in this Porsche collided with a large 40 ft RV at Victory Lane and Hwy 90 in Castroville this weekend, ejecting one and trapping another. Emergency responders from six different agencies rushed to the scene of this horrible accident last Saturday, and all three people in the Porsche were taken to the hospital with serious injuries. All are believed to be in stable condition as of this week.
“The female passenger was ejected, and the young man was trapped in the backseat,” said Castroville VFD Chief Rick Lair. “All three family members were transported, but the female had to be flown out by Air Life. We landed Air Life in the parking lot of Castroville State Bank.”
According to DPS, the Porsche was at a stop light when the RV collided with the car from behind.
Volunteer firefighters from Castroville and LaCoste VFDs cut the roof off of the Porsche to extricate the young man, who was in the backseat.
DPS, Medina County Sheriff’s Office, Castroville PD, and all three Allegiance EMS units were also needed to assist at the chaotic scene.