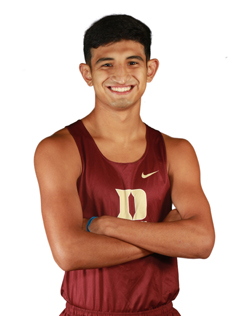 Senior and two-time State Qualifier Xavier Garza signed his celebratory form with East Texas Baptist University to run Cross Country and track at the collegiate level. Garza joins longtime and successful Head Coach Natalie Bach-Prather’s Division III program that belongs to the American Southwest Conference.
Xavier has steadily improved over the course of his Cross Country career that began six years ago as a Devine Middle School Colt. Xavier works tirelessly during the Cross Country and track seasonsand has dedicated most of his “free time” in the summers to becoming the championship runner he is today.
That dedication led Xavier to three straight Regional appearances and, as a junior, he qualified for the State Meet but was not happy with his overall finish, as he placed 87th of 151 competitors.
After claiming the Cross Country District 29-4A championship in November 2020, Xavier placed 11th overall at Regional in Corpus Christi then followed that with a 65th place finishin Round Rock in what was his last high school Cross Country competition.
One thing that stuck out in Coach Prather’s mind that November morning of State was how Xavier remained in the finish chute to fist-bump all runners who crossed the line after him. She knew then that Xavier was not only an excellent runner, but that he was an even finer human being.
Xavier also runs track for the Warhorses, recently achieving district champion status in the 3200m Run and 1600m Run. Xavier will run track for ETBU next spring.
Coach Prather has a long list of accomplishments during her tenure as both men’s and women’s Cross Country coach at ETBU and is eager for Xavier to join her illustrious program.
Xavier thanked his parents Monica Ybanez and Alan Garza, sisters Yessika and Zabella, high school coaches, teammates, and his friends for their unwavering support throughout his pre-collegiate career.
Many of us will follow Xavier and his future accomplishments as he moves on to the next phase of his life.
Best of luck!!!
By Jerel Beaty
Staff Writer