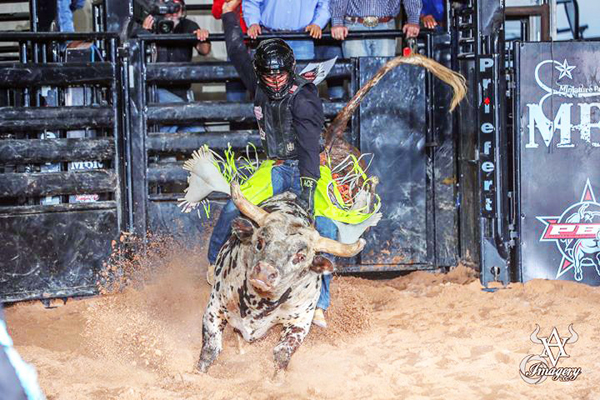 Devine boy, 13-year-old Ace Urrea, is headed to Vegas for the Chris Shivers Miniature Bull Riding World finals presented by PBR this November 2-9. The event will be televised on RidePass.
“Ace has been riding since he was 3 years old,” said his father JR Urrea. “He is sitting 17th in the world….My son is the type of teenager, when he puts his mind to it, he will get it accomplished. Ace has had many ups and downs in this sport but never once has he ever wanted to quit.”
Bull Riding for kids is one of the fastest growing sports in rodeo, and young bull riders in the MBR participate on mini bulls, all over the US. The MBR Association is affiliated with the professional ranks of the PBR.
Ace started riding at just 3 years old, “mutton bustin'” with sheep and has a long list of accomplishments in his young career already including:
2011 Champion Calf rider in
2015 join TYRA and made the finals
2016 join TCJBR made the top 15 went the AYBR finals
2017-2018 join the Elite CJBR
2019 join MBR and is going to Las Vegas to compete in the Chris Shivers Last Chance November 2-9

In one of his biggest accomplishments yet, Ace was invited to compete in Australia in March 2020. Good luck Ace!
Urrea attends Devine Middle School. Urrea also attends First Baptist Church Pearsall, TX, and during the summer he enjoys helping others along with their youth group.
He is the son of Lucia Ybanez and JR Urrea. Proud Grandparents are: Nevolena Ybanez and late David Ybanez and Grandfather Antonio Urrea and Grandmother Sylvia G. Urrea.
“I am very excited about going to the World Finals,” Ace said. “It’s my first year here and at the MBR and I get to experience a lot of things, and I can be ready for next year. I like traveling around the world, getting to see what’s outside of Texas. All gas no brakes–(that’s one of my favorite quotes).”