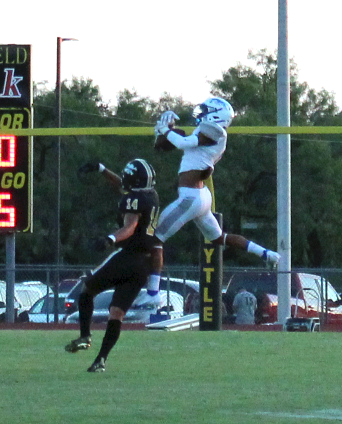 The Natalia Mustangs dominated every aspect of their 61st battle vs. Lytle last Friday night at Walter Joyce Stadium. Natalia was able to run a total of 57 plays accounting for 436 yards of offense and six touchdowns while holding Lytle to just 27 yards of offense on 37 plays ran. When the final buzzer sounded, it was the boys in blue who captured a convincing 41-0 shut-out victory in the 2021 Legacy Bowl Battle.
“We will never take a win for granted,” Natalia Head Coach Ilyan Martinez said. “I am happy to be a part of another Legacy Bowl Victory and I credit our coaches and players for being prepared and playing a great game. We know we have a lot of work to do, but we will enjoy this one for sure.”
Pirate Head Coach Adrian Trevino stated, “Rest assured that our team will continue to work hard and give our all. Congratulations to Cort Haltom and Kasen Boyd for being recognized as defensive and offensive players of the game for the Pirates. In addition, I would also like to recognize Elias Hernandez, who led our team in tackles, as well as Diego Rangel, Mario Diaz and Hudson Mask for their outstanding effort in Friday’s game.”
Lytle won the toss and elected to defer to the second half which allowed the Stangs to receive to start the first half of play. Natalia’s offense started off hot and never looked back. Natalia began at their own 36 yard line and needed just five plays to strike. Natalia used a run by Adrian Vasquez (5 yards), a Manuel Garcia trickery pass to David Silva (46 yards), a Vasquez run (2 yards) and a Ryan Rizo pass to Elijah Banda to push the Stangs down to the Lytle 8 yard line. One play later on 3rd and 5, Elijah Banda was able to bull his way through the middle and walk in for a Natalia touchdown with 10:02 to go in the opening quarter. The PAT by Garcia was good pushing Natalia out ahead 7-0.
Lytle got the ball for their first drive at their own 36 yard line. Their first two plays of the game resulted in -6 yards gained, before a pass was intercepted by Natalia’s Josh San Miguel.
Natalia began their second drive at their own 46 yard line with 8:30 to go in the 1st. Natalia used runs by Rizo and Vasquez, a Rizo pass to Silva (18 yards) and more runs by Rizo (9 yards) and E. Banda (6 yards) to set up a 1st and 10 for Natalia at the Lytle 14 yard line. This time, Banda was able to get around the edge and walk in for his second touchdown of the game. The PAT by Garcia was good, giving Natalia a 14-0 lead.
Lytle’s second drive of the game started at their own 23 yard line, but the Pirates were unable to get anything going as they would lose a total of three yards on this drive resulting in a Lytle punt.
Natalia was unable to get anything going on their third drive, resulting in a punt to Lytle giving the Pirates their third drive of the game.
On the second play of this drive, Lytle’s pass was also intercepted by Natalia’s Gabriel Perez at the Lytle 10.
Two plays later Natalia QB Ryan Rizo was able to force his way across the goal-line for the third Natalia touchdown of the game. The PAT was blocked by the Pirates, but Natalia’s lead with 20-0 with 1:18 to go in the opening quarter of play.
Natalia’s final touchdown of the first half came on a drive that began on the Natalia 39 yard line with 7:47 to go in the 1st half. Natalia used 7 plays to march down field before QB Ryan Rizo found Nate Banda on a pass route. Banda raced in for the final touchdown of the first half. The PAT was good, as Natalia took a 27-0 lead into the half.
At the half, the Natalia Mustangs had ran 31 plays for 247 yards of offense compared to Lytle who had ran 19 plays for a total of -7 yards of offense.
In the second half, the Natalia Mustangs were able to put Lytle away with two final scoring drives in the 3rd quarter of play.

The first drive was a four play drive that spanned 51 yards. Natalia used a Rizo pass to Nate Banda who made three defenders miss and two collide thanks to great feet scoring from 27 yards out with 7:52 to go in the 3rd quarter. The PAT by Garcia was good, as the Stangs extended their lead to 34-0.
The final scoring drive began at the Natalia 37 yard line as they used an E. Banda run (4 yards), a Rizo pass to N. Banda (13 yards), an E. Banda run (18 yards) before Rizo found Gabriel Perez for a 28 yard strike with 3:24 to go in the 3rd quarter. The PAT was good, as the Stangs took a 41-0 lead and never looked back.
What went well for Natalia on both sides of the ball?
“Offensively, we did a great job of taking what they gave us and then making plays in space,” Martinez said. “Our O-line controlled the line, backs ran hard, skilled players made plays and our QB managed the game and put us in great situations. That is all you could ask from your offense.”
The Natalia Mustang offense as mentioned accounted for 436 yards of offense which included 285 yards of passing and 151 yards rushing. Natalia also accounted for 23 first downs.
QB Rizo was stellar, as he was 18-28-239-3TDs-0INTs as Garcia was 1-1-46. Silva led the receivers with 7 receptions for 118 yards. N. Banda had 5-79-2TDs and G. Perez 3-52-1TD. E. Banda led rushing 6-57-2TDs as A. Vasquez had 8-55.
“Defensively I thought our guys were well prepared and suffocated their offense from start to finish,” Martinez said. “I credit our D line for controlling the line of scrimmage and our LBs were all over the place making big plays for us while our secondary were ball hawks and controlled the sky on the back-end.”
Martinez was asked his thought on holding Lytle to -yards the majority of the game.
“I credit Coach Crowther and his staff along with our defense for having a great game plan and executing it with very few mistakes.”
Defensive Stat Leaders Natalia
Assists- Devin Perez 4, Rocky Cruz 3, Austin Sutton 3, E. Banda 3, Garcia 3. Solo Tackles- Garcia 7, Banda 6, D. Perez 5, Rene Velasquez 3. Tackles for a loss- D. Perez 2, E. Banda 2, Sutton 2, Tyler Taylor 2. Sacks- Garcia 2, D. Perez 2, Sutton 2.
Lytle Final #s
Lytle’s Estrada finished 2-7-14 yards and also rushed 11 times for Lytle. Albert Aguilar led the rushing with 7 rushes for 20 yards as Amadeus Trejo-Perez had two receptions for 13 yards. Elias Hernandez led the Pirates in tackles.
Final Thoughts
“We feel fortunate to bring home the Legacy Bowl Trophy for another year,” Martinez said. “We talk about it every year of what it took to bring home that trophy to Natalia and making sure it stays here is important to our kids. Our seniors did a great job of leading our team on Friday night to make sure that happened.”

Legacy Bowl MVPs
Natalia Mustang QB Ryan Rizo was named the Offensive MVP and Elijah Banda was named the Defensive MVP. Kasen Boyd was named the Offensive MVP of the game and Cort Haltom the Defensive MVP for Lytle.
Upcoming Games
The Lytle Pirates will travel to Guadalupe County to battle the Marion Bulldogs (4-0) Friday night as they begin 14-3A (Div.I) play this week. Kickoff is set for 7:30pm. Our Junior High and Junior Varsity teams play in Lytle on Thursday at 4:30, 5:30 and 6:30pm.
The Natalia Mustangs will travel to Frio County this Friday Night to battle the Dilley Wolves at 7:30 p.m. at Gosh Field as District 15-3A (Div.II) begins.
By Eric Smith
Staff Writer