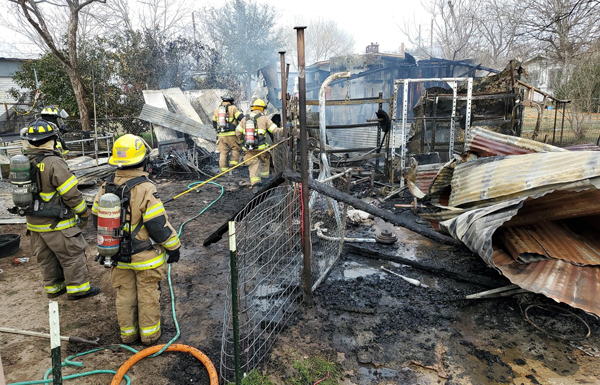 Sarah Espinosa had lain down and fallen asleep as she gave the baby a nap Thursday, March 3rd, when fire erupted right outside their home. Mrs. and Mr. Espinosa are so grateful that a good Samaritan kept banging on the doors and windows until he woke them up and got Mrs. Espinosa and her three kids out. Then emergency responders and volunteers with three different fire departments came from surrounding areas to help keep the fire from taking everything.
“So many people’s steps into action made Thursday’s fire just that and not a tragedy with fatalities. Devine and the other surrounding rural areas are so incredibly fortunate to have the emergency response teams we do,” said Mrs. Espinosa.
Not everyone realizes how many hours our volunteer firefighters spend helping our community, from stopping fires to carrying the Jaws of Life for rescues in wrecks.
“If it weren’t for “Flipper” (Rufino Vega) seeing the smoke, noticing my vehicle there and alerting us by banging on the doors and windows myself and my 3 kids, David 11, Sophia 10, and Dylan 1, may not have known until it was too late.”
The family’s shed and carport had erupted in fire just outside their home.
“Once the fire reached those items it turned into several explosions which in turn grew the fire into the wall of flames I opened my door too. Mr. Vega bravely still persisted to knock till he got an answer. My youngest daughter and I were asleep in the bedroom, and my other two were resting in their rooms as they had stayed home from school under the weather,” Espinosa adds.
“I also want to thank whoever called in the fire. Once I was able to get my kids in the car and moved out of direct danger, I called it in and they had already been notified and dispatched the emergency crews. Once I did that, I was able to go back into the house and get my dog. At this time Devine PD arrived and assisted me in breaking free my other dog that was fenced in the back where the fire was located.”

“We camped out at my amazingly gracious neighbor Corina Rodriguez’s house while the Devine, Natalia and Moore fire departments worked hard to control and stop the spread of the wall of fire. I’m extremely blessed and thankful that it was just “things” that were the casualties in the ferocious fire,” she adds.
“Our home was about 4 feet from being a part of the debris, but the fast acting responders and community members are the reason we’re sleeping in our beds still tonight. Family, friends, and kind community members offered their support as we watched the fire destroy what had been built over the 9 years we’ve been here. The love of my family, friends, the community and sheer strangers made it less heartbreaking to watch. I’m saddened by the memories and love for certain items that were lost. We will replace our items but our hero Mr. Vega and our response teams are how I get to share this with you today.”
“Thank you Flipper, Devine, Natalia and Moore VFDs, Devine EMS, Devine PD, the concerned Samaritan who made the call, Corina, my family, friends and to the man who held me as I cried during my panic, ran to get me a chair, and consoled me until my family showed up. I don’t remember your name or who sent you, but your kindness will never be forgotten. My husband, David, was at work during this unfortunate accident and got to us as fast as he could, but he couldn’t be more thankful to everyone who was instrumental in the saving of his family. From the bottom of our hearts thank you!” -The Espinosas
By Kayleen Holder
Editor