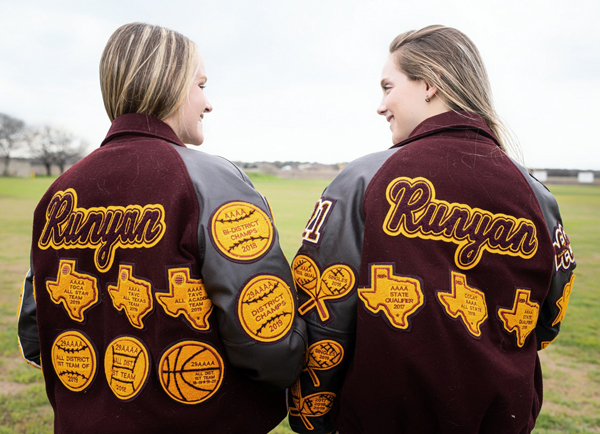 Brooke and Megan Runyan were born four minutes apart on October 27, 2002. The number of athletic, educational, and life triumphs achieved by each over the last eighteen years is simply astounding.
As the pomp and circumstance of graduation night approaches for these two Devine seniors, many see Brooke as a state-qualifying tennis player and DHS Valedictorian and Megan as a multi-sport, all-state athlete and an Academic All-State recipient.
However, their story becomes more astonishing as light is shed on major obstacles they faced as newborns and young children. What most do not know is that at one place in time their continued existence on this earth was anything but certain.

“Brooke came first and was white as a ghost so Brooke and Dad were immediately swept away to another room for a blood transfusion,” parents Paul and Kelly Runyan said recalling that day almost nineteen years ago. “Brooke turned motionless and laid there for what seemed like forever until the nurse was able to find a vein. Her color started to return, then her hand moved and she let out a cry. Then Dad cried. Then the nurses cried. Megan’s lungs were poorly developed and she was under an oxygen hood for several days with no improvement. It was then determined Brooke would benefit from some occasional short stints of oxygen as well, so both were placed under a large hood where they could be together. From that day forward, Megan started to improve and produce higher levels of oxygen on her own. They were always at complete peace when resting beside one another. In infancy, Megan’s eye development stunted due to oxygen therapy and required multiple surgeries to correct. Doctors were also concerned with her lungs in the longer term, and of her being asthmatic. Due to Brooke’s severe oxygen-starvation (hypoxia) that resulted from her/mom’s placenta rupturing prior to birth there were concerns with her long-term brain function. Several years of follow-ups occurred to measure progression of her cognitive development. As the girls advanced from babies, to toddlers, to starting school, Mom and Dad finally exhaled and prayed in relief that they had two beautiful fully-healthy girls.”
This fall, Brooke will attend University of Texas Permian Basin in Odessa to play tennis while Megan plays volleyball for Midland College. For the first time, these two will live apart from one another. However, the reason they chose their particular college was due to their continued desire to remain as close as possible.
“When Brooke and I began our college recruiting process during junior year, we found it hard to find a school that had both a tennis and a volleyball program,” Megan stated. “We really wanted to play at the same college, but did not know if that was a possibility. When we got offered by colleges 20 minutes away from each other we knew there was not going to be a better situation for us.”
Megan’s athletic path was extensive in her four years as an Arabian. She excelled in volleyball, basketball, track, and softball earning numerous All-District, All-Region, and All-State awards along with a slew of honors bestowed by different coaching associations and publications.
Brooke chose to involve herself in a multitude of sports early in her middle school and high school career, and was quite good in each. Her freshman year, Brooke made it to state in Cross Country as an individual then once again as a sophomore as the entire team advanced. Her love of tennis, however, eventually led her to pursuing that sport full-time.
“I started taking tennis lessons around the age of 8 when my grandfather introduced the sport to me,” Brooke stated of where her appreciation of tennis originated. “I can remember how challenging it was for me to just simply make contact with the ball in any manner, and I instantly gained so much respect for the sport. Running and tennis is where I believed I had a chance to make something of myself. I found that by narrowing my selection of sports that I would be able to focus more attention on them. I do not regret letting go of other sports because it helped me realize my great passion for fitness and tennis.”
Even though the sports they chose to play are different, each had an impact on the success of the other’s in their own sport.
“Since we were freshman in high school,” Megan said, “Brooke and I really started to work hard for the athletic goals we wanted to accomplish by helping each other practice. The funny thing was Brooke had played volleyball, so she would help me out a lot. I cannot say the same for myself when I would try to help her with tennis.”
“I came to Devine from a big city where kids picked one sport from a young age in which to try to excel,” Brooke stated. “In Devine, most kids were well-rounded in several sports so I decided to play as many as I could. I thank all of my coaches in high school for willing to be so workable with me. I missed multitudes of practices and games in other sports because I was in San Antonio playing tennis. The gratitude I have for them for trusting me to do the right thing and understanding my passion for tennis in immeasurable.”
Something else immeasurable is their combined number of MVPs, team and individual awards, and other recognitions these two have accumulated over their four-year high school career, and not just athletically but academically too. Brooke leads her fellow seniors in receiving their diplomas as the top student in the entire 2021 class, while National Honor Society member Megan soon follows.
As time winds down on this part of their sport’s careers and life as twins living in the same household, a new journey awaits two of the most decorated scholars to grace the halls of Devine High School.
“I have seen Brooke almost every day for the last 18 years, and I don’t know if I’m ready to give that up yet because we are super close,” Megan said.
That ‘super closeness’ has involved sharing many laughs as well, and everything they currently share may not end anytime soon, or so says Megan.
“There will be some things that I have to be aware with us living in close proximity. There is a really good chance that some of my clothes and shoes will go missing…and I might not get them back!”

As Brooke and Megan begin anew, so do their parents as they soon become “empty-nesters”. Gehrig, their oldest child and now a junior at Texas Tech University, moved shortly after graduating from Devine in 2019.
“We are so proud of Brooke and Megan and the wonderful, kind, humble young ladies they have become,” Paul and Kelly said jointly. “Life’s wins and special moments elate us because of the challenges we overcome getting there. Life decided for these two girls those challenges would begin the day they were born. We could not be prouder of their accomplishments, their dedication to their academics, and their growth as young ladies. While mom and dad are not sure what to expect when the nest goes empty, we cannot wait to see what the world holds for them next. We say ‘thank you’ to all the doctors and nurses who cared for them over those seven weeks for getting them started on their path, and allowing these young ladies to have countless special moments. Their journey started rough on October 27th, 2002 but thinking back to where they started to where they are now, we/they are truly blessed.”
By Jerel Beaty
Staff Writer