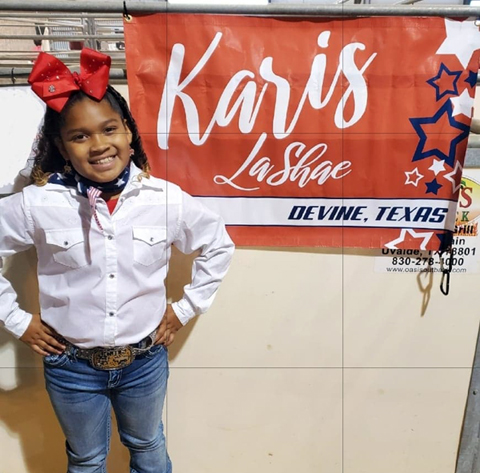 Local Devine 5th grader, Karis LaShae and family are excited to announce that Karis will be in a new show called Pig Royalty which began airing on discovery+ last week.
“My daughter Karis will be making some appearances in some of the episodes. She’s in 5th grade and attends Devine Intermediate. Karis has been telling friends and classmates about the show while she was filming, and she is so excited for everyone to see it,” said her mother Mary Anne Flores-Garcia.
“She got involved through Tyler Parrish with Parrish Show Pigs. He works with the Rihn family with Rihn Show Pigs out of Sabinal, who the show followed. They have been showing pigs for many years. Tyler asked if Karis would like to be a part of the show. I said of course. So the producers from Hot Snakes reached out to me and we did some interviews and signed paperwork. They came out to Devine and did some filming and also followed her and the Rihn team while they did jackpot shows around Texas.”
An article on People Magazine states, “Pig Royalty, a new original series from discovery+, gets in the mud with Texas’s show pigs and the families that love them.”
According to TV Insider: Everything’s bigger in Texas — including the hogs! New Discovery+ series Pig Royalty puts 4-H rivalry to the test as two farming families dive headfirst into the muddy drama of pig show competitions. According to the press release, the reality series follows both sets of pig parents as they “criss-cross Texas competing for the ultimate prizes: money, scholarships, big, shiny belt buckles that ‘crown’ the winner, and all the bragging rights that go with them.”