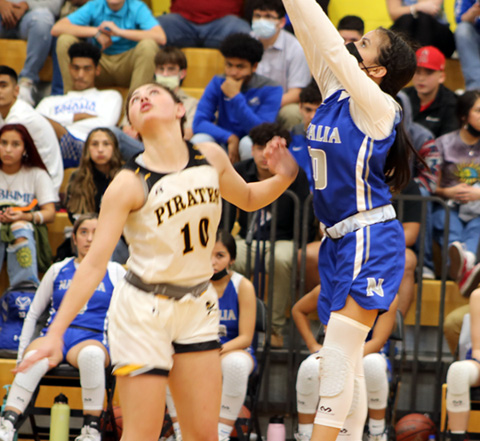 The Lady Mustangs faced off against their rivals, Lytle and Cotulla last week and went 0-2. Now 6-6, the Lady Mustangs have fallen to 6th in district. They played Poth last night and will host Dilley this Friday. Their last two district games will be against West Campus and Karnes City.
Meeting Lytle for the second time in district, the Lady Mustangs came out strong and looked to improve on the last time they played. When they played back in December, the Mustangs fell 42-56; this time was a different story.
Starting for Natalia was Tina Fulton, Bella Martinez, Yahdi Lujan, Jelli Padilla, and Kylie Spangler. Lytle won the tip off, but Natalia quickly took the ball back. Both teams would fight for the first points and Lytle would strike first after two full minutes. McAiyla Ruiz earned the first Natalia points with a three-pointer. Another three from a Lady Mustang and they were within three points at 6-9. Lytle would take the lead and end the quarter 15-8.
The Lady Mustangs were up to 7 fouls early in the second, the referees were calling everything under the Lady Pirate basket. A pass from Martinez to Ruiz turned into a quick three-pointer. The rest of the second quarter would go to Lytle to end the half 29-16.
Coming out in the third, the Lady Mustangs missed their first two shots. Inbounding the ball from under their basket, Fulton was fouled, and she made both of her free-throws. Another foul found Spangler at the line for another free point. Now just down 10, a crash sent Martinez to the floor holding her ankle and she had to be helped off the court. Spangler added three quick points to the board with a free-throw and a jump shot. Then a three from Addison Crowther and the Lady Mustangs were down 26-34 with the gap closing. Lytle added four points quickly but a driving jumper from 4 and a long, nearly half court, basket from Fulton lit up the crowd and put the Lady Mustangs within 7 at 31-38. Natalia outshot Lytle 15-9.
In the final quarter, Natalia answered Lytle’s first basket with one of their own. Back down by 10 points, the Lady Mustangs closed it back to 8 points with two free-throws. A three from Ruiz put Natalia within 5 with four minutes left in the game. Lytle would score enough points to maintain their lead, but Natalia never gave up. Lytle could not score in the last minute and Natalia added 6 to the board but the game ended before they could take the lead. Lytle won 55-51 but it was nearly the Lady Mustangs game. Natalia again outshot Lytle 20-13.
Stats: Spangler 17 points, 13 rebounds. Ruiz 15 points, 5 rebounds. Fulton 10 points, 7 rebounds. Padilla 5 points. Solis 4 points. Lujan 3 steals. Duenes 2 steals. Q1 8-15, Q2 16-29, Q3 31-38, Q4 51-55.
Friday night at home, Natalia took on Cotulla. The Cowgirls took the first quarter 15-6 but the Lady Mustangs fought back and were only down 6 by the half. Cotulla continued to grow their lead in the third and won the game 45-35 to hand Natalia their 6th district loss. Natalia outshot Cotulla in the second 8-11 and in the fourth 12-7 but it was just not enough to close the gap.
Stats: Fulton 12 points, 7 steals, 7 steals. Jones 5 points, 10 rebounds. Lujan 5 points. Ruiz 4 points, 6 rebounds. Spangler 4 points, 8 rebounds, 3 steals. Martinez 3 points. Padilla 2 points, 4 steals.
By Dicy Chambers
Sports Writer