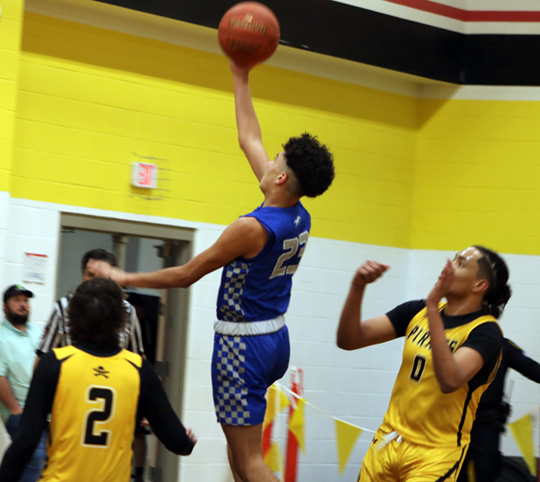 Meeting for the second time in district, the Mustangs took on their rivals from Lytle on Tuesday night. It was a rough one-sided game and the Mustangs fell 30-89. Now 1-8 in district, they will face Dilley at home this Friday, at West Campos on February 1st, and then back at home to play Karnes City.
To start the game, Natalia would be down by seven before David Silva would drive in and then pass back to Manuel Garcia for the easy basket. The quarter would go to Lytle 24-2.
Free throws from Devin Chapa would be Natalia’s first two points of the second quarter. The lid would remain on the basket for the Mustangs for most of the quarter. The only other points of the half came from a lay-up by Joshua San Miguel and a free-throw from Manuel Garcia. The quarter ended 52-7.
Running their offense allowed San Miguel to sneak in for a shot under the basket and then Joseph Gonzales was fouled driving in. He sank both of his free-throws. With the Pirates leading 68-14, Gonzales swished a three-pointer. Matthew Martin worked his way under the basket and made a tough shot through defenders.
In the fourth quarter, the Mustangs held the Pirates to just 13 points but could only score eight of their own to fall 30-89.
“Lytle was able to jump out to an early lead and control the rest of the game on both ends of the floor. We struggled taking care of the basketball and turned it over way too many times. Lytle did a good job of forcing the tempo and forcing us into bad shots that allowed them to get some easy buckets in transition,” said Coach Justin Welsh.
Stats: Silva 2 points, 1 assist, 1 steal. Chapa 6 points, 2 rebounds, 3 assists. Rodriguez 4 points, 4 rebounds, 1 steal, 1 block. San Miguel 4 points, 4 rebounds. Gonzales 7 points, 3 rebounds, 1 assist. Martin 4 points, 4 rebounds, 1 assist, 1 steal, 1 block. Manuel Garcia 5 points, 7 rebounds, 1 assist, 1 steal. Q1 2-24, Q2 7-52, Q3 22-76, Q4 30-89.
Friday night at home, the Mustangs faced Cotulla and it was a wild game. Going into the 5th overtime, both teams were worn out but they pressed on. The game ended 30-30 and each team scored 7 in the first overtime. Overtime two added five points, OT3 was 3 more points and four points in OT4. Finally in the 5th overtime, Cotulla added 4 points to Natalia’s 0 and the game ended 49-53.
“Things did not go our way in the end as we fell by a score of 49-53 but I am extremely proud of the boys for battling for 52 minutes last Friday. We had our opportunities to win, as well as being down in a couple of the OTs, but our guys continued to battle and left it all on the floor. It was an exciting game for our kids and fans and although we didn’t come out on top, I think it shows the fight that our guys have. We will be better because of it and learn from it so we can finish those close games next time we are in them,” added Coach Welsh.
Burford 19 points, 9 rebounds, 2 steals. Zapata 1 block, 1 rebound, 1 steal. Chapa 2 rebounds, 1 steal. Rodriguez 8 points, 7 rebounds, 2 steals. San Miguel 18 points, 11 rebounds, 5 steals, 1 assist. Gonzales 2 rebounds, 3 steals. Martin 1 block, 2 rebounds, 3 steals. Garcia 4 points, 2 assists, 8 rebounds, 3 steals. Q1 8-4, Q2 16-12, Q3 20-21, Q4 30-30, OT1 37-37, OT2 42-42, OT3 45-45, OT4 49-49, OT5 49-53.
By Dicy Chambers
Sports Writer