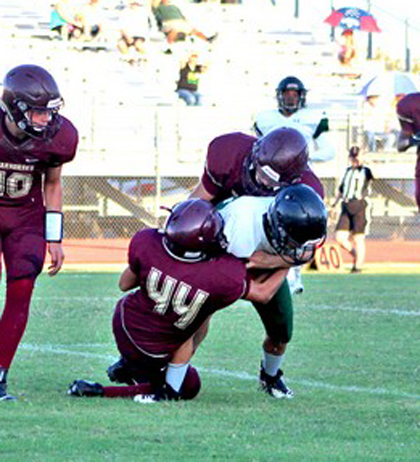 Devine’s JV football team fell behind 22-0 going into the halftime break against San Antonio Southwest Legacy last Thursday at Warhorse Stadium. The Warhorses made a valiant comeback attempt, falling just short by the final score of 22-12.
“We didn’t have a very good first half,” stated Coach Heath Poppe, “but our second half performance was very encouraging. I like what I saw from both sides of the ball after halftime.”
According to Coach Scott Taylor, “With the JV only having two linebackers, Haydn Brumage and Zachary Rico got all of the defensive reps. Those two, as well as others, did some good things at times but we had trouble with the other teams speed on the edge.”
Warhorse running back Brumage provided the two touchdowns on the night. In the third quarter, Brumage took the pitch and started to the right side of the formation before cutting it back to the left and up the visitors sideline for a 65-yard touchdown run.
Midway through the fourth quarter, Brumage once again took the pitch. This 28-yard touchdown run mirrored the first as he went left before cutting it back to the right to score.
Up next
The JV travels to Pleasanton for a 6:45pm kickoff Thursday night.
By Jerel Beaty
Staff Writer