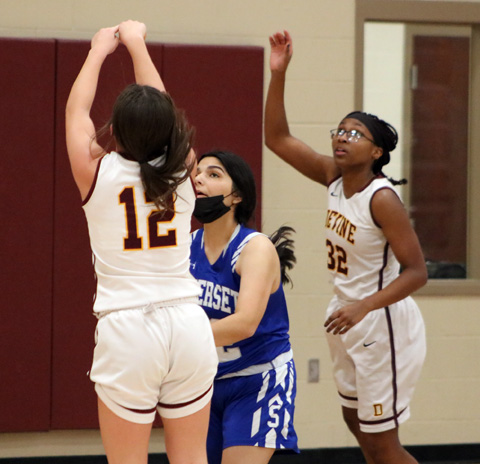 Friday night basketball opened with the JV Arabians hosting the Bulldogs. Eight players in uniform, Devine was set to play. With this being their only game of the week, the JV Arabians started and ended the game with a lot of energy.
Up 18-4 with six minutes left in the half, the JV Arabians were powering through the Bulldogs. Somerset rebounded the ball and drove down court but #34 was there to stuff her and get the ball back down the court for a 3 from Oakley Malone. With two minutes left, Devine led 25 to 7 with no sign of slowing down. Somerset was moving down the court quickly, but Devine stopped all their plays. Another 3 from Malone put Devine up 30-7 at the end of the half.
Somerset started the third with the ball but after running their offense, they lost it out of bounds. Devine used that possession to add two to the board. A long pass down court to Tatiana Gilbert and another basket was added to the scoreboard. With Somerset in a zone, Devine moved the ball around to open up Malone for her first 3 of the quarter. With her head up, Malone passed downcourt to Airyana Rodriguez who then made a smart pass to Gilbert for the easy basket. Devine led 45-14 at the end of the third.
As the fourth quarter started, fans slowly started to fill the Devine stands for the Varsity game. Their cheers filled the court after Malone doubled down on repeat jumpers to put the JV Arabians up 49-14. Dribbling downcourt, Maddie DuBose pushed through the defending Bulldog to make a lay-up. Avery Mobley ripped the ball out of what should have been called a jump ball to get the ball down court for a basket from her teammate. Now with just three minutes left, Devine had seven fouls and Somerset would go to the line for 1 and 1 free throws. But leading 59-14, the Arabians spared a few points if Somerset could make their free-throws. Pulling the ball back to run their offense, Devine attempted to slow the pace down for the last 90 seconds. The Arabians won 59-16!
By Dicy Chambers
Sports Writer