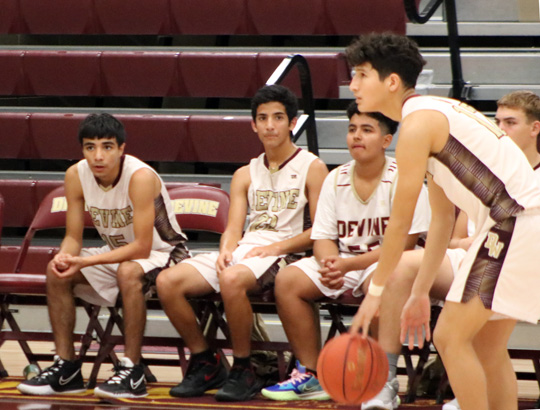 Facing two very tough teams last week, the JV Warhorses fell to Crystal City and Somerset. They will play YMLA this Friday night at home and then head to Brooks Academy on Tuesday. Now 0-1 in district, the JV Warhorses have plenty of time to earn a winning record.
JV boys lost Tuesday night in Crystal City at 59-38. “We could not make our shots to start the game and fell behind and could never catch up. The boys played hard. I am very proud of them; we only dressed out six boys Tuesday night and they all worked as hard as they could, but we just came up short,” said Coach Gary Schmidt.
Points: Carson Surh 4, Johnathan Esquibel 10, Trinadad Hernandez 10, Jacob Antu 6, Ruger Cote 8. Q1 4-20, Q2 19-29, Q3 29-48, Q4 38-59.
Friday night in Somerset, the JV team knew Somerset would be tough to face and they were. Falling 29-72, the Warhorses fought hard and no player fouled out. With only six Warhorses on the JV team for this game, Devine had to work even harder.
Points: Hernandez 11, Antu 12, Cote 6. Q1 4-21, Q2 15-43, Q3 21-58, Q4 29-72.
By Dicy Chambers
Sports Writer