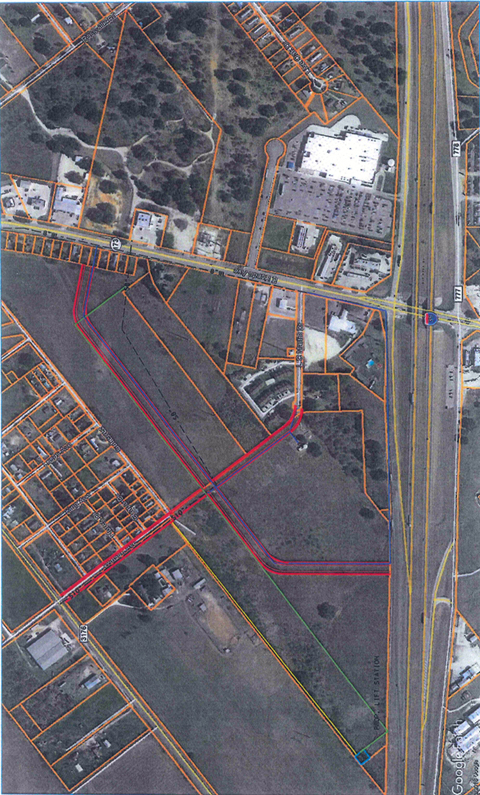 TIRZ consultant Lance Elliott debuted an updated version of the City of Devine’s proposed thoroughfare to connect Highway 173 with the IH-35 access road and County Road 3176 during the City Council meeting held last Tuesday, November 17.
The goal of the thoroughfare is to create access to approximately 43.58 City-owned acres inside a Tax Increment Reinvestment Zone (TIRZ) near IH-35 behind Triple C Restaurant in order to make it attractive to private developers.
A TIRZ captures projected tax revenue increases and uses that money to construct public infrastructure and reduce the cost of private development by reimbursing developers for eligible improvements.
“The City property cannot really and truly be developed unless we have a road that comes back to 173 because the access road ends before the [City] property,” Elliott said. “So anybody coming into the City property would then have to go down to the far turn-around and then come back again.”
In addition to constructing a thoroughfare, the development plan calls for the City to extend utility lines and build a lift station to pump sewage. City Engineer Raul Garcia estimated the cost of that work at $3.5 million, a figure that did not include the cost of purchasing private property, when the plan first became public during a Nov. 2019 Council meeting.
The City currently has 28 acres of privately-owned, undeveloped property bordered by Hayden Avenue and Gutierrez Avenue on one side and private property on its other sides under contract for $325,000 until February 2021.
Garcia rerouted the planned path of the thoroughfare to accommodate the QuikTrip convenience store under construction.
“Mr. Garcia has designed a road through the property we have under contract and through the City property,” Elliott said, “and if you’ll notice, it will require the purchase of several additional pieces of property in order to get to 173.”
The thoroughfare’s new path to connect with Hwy. 173 now takes it directly through private property bordered on either side by private residences.
Elliott said he is working on a grant through the Economic Development Agency that should be submitted by mid-December.
“When we go to the bank to borrow the money to purchase this [28 acres], we’ll use the TIRZ fund as collateral for the purchase of the property,” Elliott said. “We’ll purchase it, ideally, probably on a five-year note, interest only during the five years, that will allow us to construct a street using a partial EDA grant. And then as we begin to sell pieces of property off, we’ll use those proceeds to pay off the property.”
Elliott said that developers are attracted to development, and that Walmart and QT are enticing.
“So with this QT and with the City acquiring this property, we’re very confident that we can start attracting users to both the City property and to the property that we’re acquiring.”
Elliott also passed along information that QT provided him regarding the company’s employment plans for Devine.
“They will have approximately 20 employees, of which five to six of those will be full time,” Elliott said. “Their manager makes between $80,000 and $100,000 a year; the assistant managers make $40,000 a year.”
Part-time employees start at $10.00 an hour and are eligible for performance bonuses and longevity pay after six months. Promotions to managerial positions are made within the company. 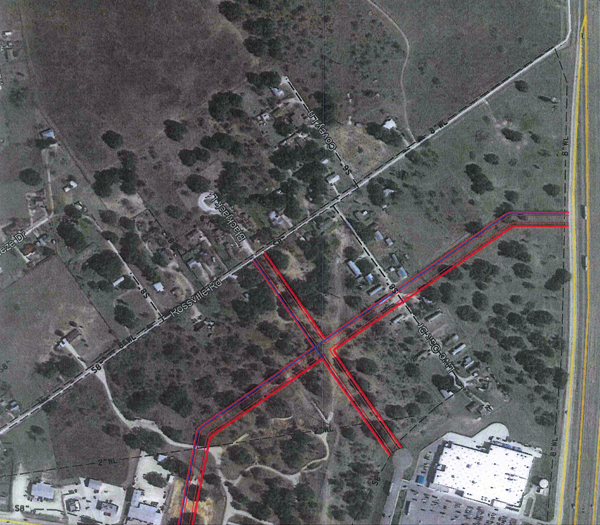 Thinking ahead
A second map provided at the Council meeting shows future plans to build another thoroughfare that connects to the IH-35 access road from the northeast side of Hwy. 173. Plans for that road show it running through private property between W.O.G. and O’Reilly Auto Parts and intersecting with Live Oak Drive before connecting to the access road.
Another, shorter street bisecting the first and connecting Rossville Road and Walmart’s Oak Hill Drive is also part of the plan.
By Marly Davis
Staff Writer