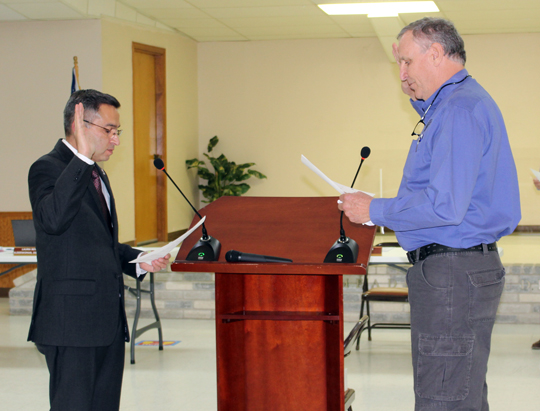 The City of Lytle welcomed and installed its newly elected Mayor Ruben Gonzales on November 17,2020 , newly elected District 5 Councilman Charles Cate, re-swore in District 4 Councilman-elect Jerry Stone. They voted District 2 Councilman Sam Cortez as Mayor Pro-Tem and Lupe Castro as Councilman to fill the District 1 Unexpired Term vacated by Gonzalez due to being elected to the Office of Mayor.
Canvassed Election Totals
City Secretary Josie Campa explained that the provisional votes were counted and made a slight change in the election totals. Final official totals were: Mayor’s race Ruben Gonzalez won with 620 votes to 510 over incumbent Mark Bowen. District 5 Charles Cate won with 139 votes to 95 over Frank Rizo. District 4 incumbent Jerry Stone received 209 votes. The proposition passed with 895 for vs 243 against.
Judge Chris Schuhart administered the oath of office to Mayor Ruben Gonzalez and Councilman District 4 Jerry Stone. Linda Cate had the honor of administering the oath of office to her son new District 5 Councilman Charles Cate and also to new District 1 Councilman Lupe Castro.
Select Mayor Pro-Tem
Mayor Gonzalez stated he had asked who would like to be considered for Mayor Pro-Tem and that Sam Cortez, Laura Reyna and Charles Cate had all volunteered to be considered for the position. Councilman Stone made a motion, seconded by Charles Cate nominating Sam Cortez citing his 15 and half years of experience.
Councilwoman Reyna announced she would be willing to step in and step up for that job, always having the heart of Lytle at all times in mind. She reminded the council, “I have brought many things to initiative such as market day vendors, recycling, Cares reimbursement up to $160,000, SA Food Bank two drives to Lytle area feeding over 200 meals.” She reminded them that , “The Mayor Pro-Tem needs to be someone who is willing to step in, it’s not just an honor or a title. Someone who is able to step in at a drop of a hat and work for example with Emergency Management matters”.
Councilman Cortez announced, “I too am qualified and I am willing to serve and be there for the city”. Council then voted in Cortez to be the Mayor Pro-Tem with 3 for (Young, Cate, and Cortez and 1 against (Reyna). District 4 seat was vacant at this point in the meeting.

Fill vacant seat
Next up was to consider filling the District 1 seat, formerly Gonzalez’. Mayor Gonzalez asked the council to delay the appointment, “Our council should have an opportunity to reach out to others interested and not be rushed to fill the vacancy. I ask to table it and allow to be discussed in December.” Lupe Castro was nominated. He is a decorated Vietnam Veteran and wanted to serve on council, has prior experience boards. “I would like to serve the citizens, I’m here and I’m ready”, said Castro. After some discussion and thoughts of whether this item should be on the agenda so soon a Cortez/Stone motion went to vote will all unanimously agreeing 4-0. Castro took his pre-oath office from Campa and then oath of office with Linda Cate, and took his seat at the council table.
PID
The PID (Public Improvement District) Policy for Lytle Farms was approved as presented.
Community Center as Alternate Emergency Center
The Lytle Community Center was approved as an Alternate Emergency Management Operation Center. “After our recent natural gas outage, we determined that we need to have a large location with additional room and appropriate resources to take care of a large group of personnel and their vehicles”, said Gonzalez.
Proposal for Next Phase of Water Well Project
The council approved the opportunity to now have a single point of contact for the last phase of the water well project. By accepting this proposal, the city engineers, TRC, will be overseeing the complete project. This is so important especially since Lytle needs to get this well on line as soon as possible. This new well will give Lytle the backup needed in case the primary well goes down. It will also provide Lytle with the additional water supply as the city begins to grow.
Mayor Gonzalez expresses thanks
After he was sworn in Mayor Ruben Gonzalez thanked Medina County Judge Chris Schuhart for administering his oath of office and thanked the citizens of Lytle and his supporters. “Thank you to the citizens of Lytle for giving me the opportunity to serve. I’m very honored to have been selected to serve in this position”, said Mayor Gonzalez. “This would not be possible without the outstanding support of my family, AD and our sons Ruben and Tony, and friends. To my “Meet you on Main Street” supporters and our great residents of Lytle, thank you for all your honks! Seemed like we developed a special bond on Main in the last couple of months. Thanks for all the feedback on what our city needs and what needs to be fixed. You planted seeds that I never forgot about.
He gave a thanks to some great mentors and community leaders who make things happen and a special thanks to Mayor John Criner, former mayor of Enid Oklahoma, ” who taught me a lot about civic duties in the community and is a good mentor and sounding board for me.”
“A very special thanks to the Kroeger’s. What a great couple and friends. Betty, I never forgot what Ernie believed in and what he cared about. I will do my best to keep him alive by doing the things that he would have done for this community if he was still with us. (A chair with a white rose was placed in Ernie’s honor at the meeting.) He was such a great person, that we all need to keep his legacy alive. When I’m stuck on what to do next, I just to ask myself, “What would Ernie do?”
Lastly, to Mayor Bowen, the council and city staff (James, Richey, Matt, Josie, Santi, Cassandra and rest of our employees and Tom our city attorney) I appreciate the last three years of working together and taking care of our city. I look forward to our continued opportunities as we serve our community’s needs”, said Mayor Gonzalez.
Informational
Trash pickup Friday following Thanksgiving
In observance of Thanksgiving Day, no collection will on occur on Thursday. Lytle’s service will occur on the following day, Friday, November 27. And then return to normal the next week.
Residential Christmas Decorating Contest
Lytle will have a residential Christmas decorating contest. Mayor Ruben Gonzalez has requested Lytle go ahead and have this contest since it is for residences, and should not involve people gathering. Lytle is asking that citizens follow CDC guidelines and keep safe by not having people from out of their household helping with the decorating.
Christmas Parade Dec. 12 to replace Hayride
The City of Lytle will host Santa’s Vehicle Parade instead of the Annual Santa’s Hayride this year. It will be on Saturday, December 12 starting at 6:00 p.m. from the Lytle Community Center. The route will be selected the week before the event and will be determined by the number of lights and decorations on display. People participating in the parade are encouraged to decorate their vehicles and those judged the best will receive prizes from local businesses. See separate story in this week’s Devine News for more details and Corona virus rules to keep everyone safe. No trailers or people allowed in back of pickups. Everyone must remain in vehicles. Only normal vehicles allowed, passenger capacity must be followed.
By Kathleen Calame
Publisher, The Devine News