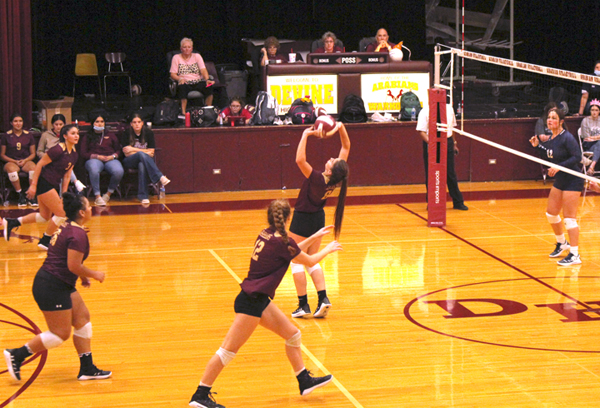 Devine started out their week with a loss to Navarro but finished it with a big win over Hondo. After last week, the Arabians sit at 16-11 and have just a couple more weeks before district.
Tuesday night they took Navarro to five sets. Devine won the second and third set and when it came down to the very end of the 5th set, they only lost by two at 16-18. Devine earned 104 digs in the five sets. “Even though we didn’t come out with the win, I couldn’t be prouder of these girls. The first set was not our best showing but they regrouped after it and really competed! They really picked it up on defense and were way more aggressive on the offensive side. We were the much smaller team height wise but our girls played huge! We were able to get our hands on a lot of their hits and were able to hit around or over their block. I knew the girls were able to play at this level and they finally did it! We have been working on different skills in practice and really talking about the mental aspect of the game and the girls applied a lot of it tonight,” said Coach Leigh Anne McIver. Set scores Devine 12-25, 26-24, 25-22, 23-25, 16-18.
Zoe Gonzales 2 kills, 2 digs. Avery Cruz 1 ace, 31 digs. Rylee Esquibel 15 kills, 1 ace, 17 digs. Kristina Moralez 16 digs. Bailey Oropeza 1 ace, 15 digs. Darian Alvarez 2 kills, 3 digs, 1 assist. Brooklyn Miller 6 kills, 1 block. Macey Hein 6 kills, 1 block, 11 digs, 45 assists. Aleyna Gerlach 8 kills, 3 digs. Skylar Blanton 8 kills, 1 dig. Cece Martinez 5 digs.
Friday night at home, the Arabians took on Hondo and sent them home with a 3-1 loss. Devine only dropped the third set but won the game, 25-15, 25-20, 15-25, 25-17. “We came out with great intensity on the first set! We were aggressive at the net, moved our feet well on defense and really limited our errors. Hondo came alive a little more in the second set but we were able to pull it together and finish the game. The third set was not our set. We lost our focus a little but made way too many unforced errors. Fourth set we got our focus back and started playing like we did in the 1st set and was able to control that set and take the win,” said Coach McIver.
Gonzales 3 kills, 3 digs. Cruz 14 digs, 2 assists. Esquibel 11 kills, 2 aces, 26 digs. Moralez 2 aces, 9 digs. Oropeza 1 ace, 5 digs. Alvarez 2 kills, 1 dig, 1 assist. Miller 4 kills, 2 digs. Hein 5 kills, 5 digs, 32 assists. Gerlach 9 kills, 7 digs. Blanton 6 kills, 3 digs. Martinez 8 digs.
Devine plays in Fredericksbug on Friday, at home Tuesday against SA Feast, and then open district on September 24th at home against Somerset.
By Dicy Chambers
Sports Writer