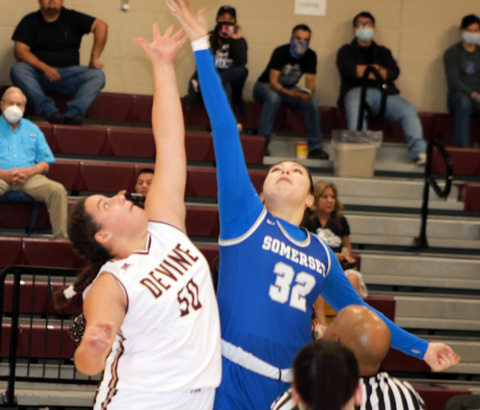 With games being canceled and postponed, the Arabians were ready to play Brooks on Wednesday and then take on Somerset on Friday. Winning both of these games and Fox Tech forfeiting, the Arabians are now 3-0 in district and 21-7 overall!
“After not playing for nearly 10 days due to rescheduled games for some of our district teams dealing with COVID, we finally got to start district play against Brooks Academy. The girls were happy to be back on the floor and it showed. We jumped out to a quick lead and really never looked back. We did a great job of playing with intensity and focus. Everyone contributed to the effort. The win was a good way to start district play,” said Coach Jim Sessions.
Winning 71-5, the game was dominated by Devine! Shooting 50% from the free-throw line and earning 22 steals with 44 points off turnovers.
Stats: Andrea Rios 8 points, 1 rebound, 5 steals. Lacey Shook 4 points, 1 rebound, 1 steal. Macey Hein 15 points, 1 rebound, 4 steals. Yessika Garza 10 points, 7 rebounds, 2 steals. Kadence Yeats 3 points, 2 steals. Joselyn Guajardo 4 points, 4 rebounds,1 steal. Mackayla Schnautz 8 points, 6 rebounds, 4 steals. Denise Contreras 1 point, 5 rebounds, 1 steal. Cece Martinez 6 points, 3 rebounds, 1 steal. Liah Romero 12 points, 9 rebounds, 1 steal.
Somerset won the tip off, but they could not break into Devine’s zone defense and lost the ball to a bad pass. Hein brought the ball down and after running the offense, Garza was knocked down pushing into the basket. Making a free-throw, Devine was on the board. Somerset tried to shoot the ball from under the basket, but Macey Hein blocked her shot, and the ball went out of bounds. A few plays later, Hein sank a three-pointer and after Shook stole the ball as the Bulldogs tried to move down court. Missing her lay-up, Hein was right behind her to get it into the basket. Now leading 6-0, Somerset called a time out, and brought the ball down court. A late back court call put the ball back into the Arabians hands. Somerset’s defense kept Devine out of the paint, but the Arabians made their outside shots. Somerset finally got on the board with a free-throw with 3 minutes left in the first. A risky pass from Hein to 33 turned into another Arabian basket that lit up the crowd. Hein ended the quarter with a lay-up and Devine led 17-3.
Somerset came out more aggressive in the second quarter, but the Arabians continued to mess up their passes and plays. Garza drove down the court but bounced off a bulldog to go to the line. She made both free-throws a fight under the Bulldog basket for the ball and 50 came out with it. Hein stole the ball at half court for a lay-up. Now up 24-14, Somerset found their shot. The half ended after a basket by an Arabian was not called as good.
Somerset opened the 3rd with a free-throw and brought the score within 7. Devine answered with a three-pointer. Now within 6, Somerset played with more aggression but that sent Hein to the line where she made shots. She then stole the ball and drove to the basket where she was again fouled. Making both of her shots, the Arabians were up by 10. Another 3 from Hein and the Arabians lead grew to 13 and the quarter ended 36-23.
An under the basket shot from Romero were the first points for Devine in the 4th. Somerset spread out their zone d but that opened up the paint for baskets for Devine and moved the lead to 15 points. Going in for a powerful lay-up, Garza was fouled and sank one of her free-throws. At the four-minute mark, Devine led 41-29 with another Somerset time out. Somerset pressed hard when Devine would come down the court, but Hein still found a hole to drive throw. Fouled again, she brought the Arabians lead back to 10 points. With the referees being yelled at by the Bulldog coach, the Arabians did not let their questionable calls faze them. Somerset closed the lead to 7 with under 2 minutes to go. The Arabians pulled back, and Hein attempted to out dribble the Bulldog defender to run down the clock before she was fouled. Under a minute to go, Hein was aggressively fouled, and she took the opportunity to sink both of her free-throws. Hein dribbled out the last 20 seconds and Devine won it 45-35.
“I thought the girls did a great job of being locked in on the defensive end of the floor early in the game. We also did a great job of executing on the offensive end of the floor as well. We worked well as a team and we did a great job of playing with intensity throughout the game. The Arabians stayed aggressive on both ends of the floor and we did a great job of rebounding the ball. It was a great win for the girls. You could tell that they were willing to do whatever it took to get the win. It was a very solid win. Hein led us with 25 points; Garza had a double-double with 10+ points and 10+ rebounds, and Shook, while not scoring, was really good on the defensive end of the floor and had 8 rebounds. Romero and Schnautz did a great job guarding the Somerset post players and they were active on the boards as well. Yeats, Contreras, and Rios were solid on both ends of the floor as well. The bench was excited and into the game as well. Honestly, it was a great team win,” added Coach Sessions.
Stats: Shook 8 rebounds, 2 steals. Hein 25 points, 6 rebounds, 4 steals. Garza 11 points, 11 rebounds, 4 steals, 2 blocks. Yeats 6 rebounds. Schnautz 2 points, 2 rebounds. Contreras 1 point, 2 rebounds. Romero 6 points, 12 rebounds. Q1 17-3, Q2 24-14, Q3 36-23, Q4 45-35.
The Arabians will take on YWLA this Friday on the road and then play at home against Brooks on January 25th.
By Dicy Chambers
Sports Writer