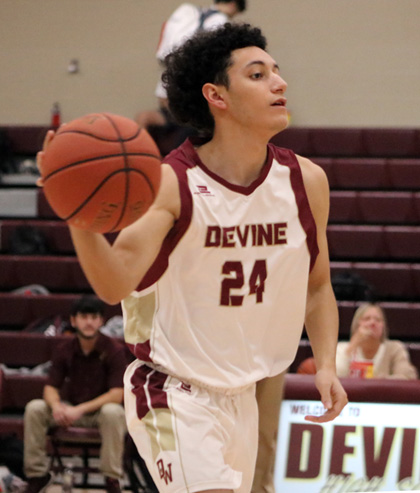 It was Parent’s Night in Crystal City for the Javelinas. After a short celebration thanking the parents, the game got underway. Peyton Carr scored first for Devine and then tied the game up at 4-4 with a lay-up. A great pass from Chris Ortiz to Caden Hanson for a three-pointer. Devine won the quarter 9-8.
During the second quarter, Crystal City would add 20 points to Devine’s 9. The points came from a lay-up from Hanson, a basket from Peyton Carr, a bank-shot from Ortiz, and a three-pointer from Hanson.
In the second half, Kaiveri Alverez bounced off the backboard for the first basket. Down 20-40, Alverez wove his way into a lay-up for two-points.
The Warhorses would start the fourth quarter 24-46 and with tired legs, they pushed hard to finish the game. The Javelinas continued to press making their shots. Alverez earned a lay-up and Xavier Contreras sank a free-throw and then Ortiz made a three-pointer to bring the score to 30-56. A pass to Carr who turned and made the quick basket. Alverez was fouled shooting and he made a free-throw for Devine’s last points. Crystal City won 64-35.
Caden Hanson 8 points, 1 rebound, 1 steal. Eli Contreras 8 points, 5 rebounds, 1 assists, 4 steals. Peyton Carr 14 points, 4 rebounds, 4 steals, 2 charges. Xavier Contreras 1 point, 4 rebounds, 3 steals,
Friday night the game was in Somerset (20-4) for the Warhorses last week. This was also the first district game for both teams. With only six players traveling, Coach Eads would have to make his substitutions count to give every player a break. Somerset was up by 4-points before the Warhorses made the board when X. Contreras worked his way to the basket for a lay-up. A beautiful three-pointer from X. Contreras was the next few points Devine scored. In the last minute Marcus Espinosa passed to the open Carr for an easy two points. Another jumper from X. Contreras and the quarter ended 13-26.
Devine came out in the second with as much energy as the first and they did not let the growing gap in the scoreboard affect how they were playing. A jumper from X. Contreras ended Somerset’s point run. A rebound and a basket from Espinosa and Coach Eads called a time out to give his team a chance to breath and make a couple of changes. With the score 19-39, Hanson sank a three-pointer from near the baseline. Devine would end the half 24-41.
The third quarter opened with a 13 point run on the Warhorses with a basket from X. Contreras after a long pass from Sage Cruz. Fighting for every ball, the Warhorses were not giving up. Devine’s last points of the quarter came from a three-pointer from X. Contreras and a rebound jumper from Carr.
Starting the quarter down 31-70, the Warhorses focused on defense and stopping the Bulldogs from scoring. With three and a half minutes left, the Bulldogs were up 84-37 and the Warhorses only allowed them one more basket to finish the game 47-86.
“We gave it our best. No excuses from the Warhorses. They are competitors, and we hope to get some players back this week,” said Coach Eads.
Stats: Roberts 10 points, 5 rebounds, 2 assists. Mata 2 points, 2 rebounds, 2 assists. Carr 8 points, 13 rebounds, 1 assist, 1 steal, 1 charge. X. Contreras 16 points, 3 rebounds, 2 assists. Hanson 7 points, 5 rebounds, 1 assist, 1 block. Morin 5 rebounds, 1 assist.
By Dicy Chambers
Sports Writer