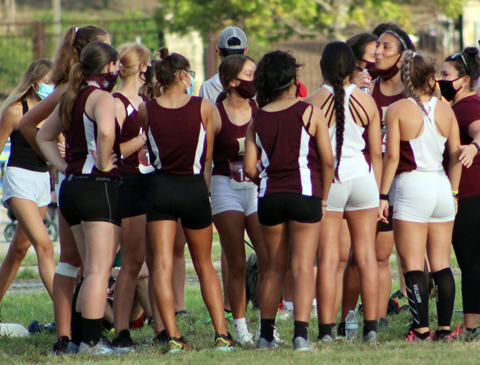 Devine Cross Country Head Coach Hannah Thompson eagerly began the Arabian and Warhorse season July 19 in preparation for the upcoming 2021 season. The Arabians and Warhorses captured their respective district championships in 2020, and look to add more hardware to the championship case this season.
Devine has around twenty runners currently attending practices every morning at 6:30am. Although the numbers are down just a tad from previous seasons, Coach Thompson is thrilled with her squad’s work ethic and their enthusiasm shown thus far.
Uvalde is the sight for the first meet of the season. It is scheduled for Saturday, August 14. A quick turnaround awaits the runners as they run at Devine Golf Course on Wednesday, August 18 for their second invitational of the young season.
Up and at’em
For the first two and a half weeks of practice, Devine has run from 6:30am to approximately 8:00am, Monday through Thursday. Cross Country shares athletes with band and football, so Coach Thompson holds practice early so athletes can make it to their next practice whatever that may be.
For runners who want to run, it is not too late to join the team. Contact Coach Thompson or Coach Mark Mangold for information regarding the when’s and where’s of their next practices.
That’s cool
The runners (and coaches) got a little reprieve from Mother Nature with the cooler temperature and rain Monday morning. My guess is it was one of the most enjoyable practices of the young season.
Physicals
As is the case with all sports, a completed physical must be on file with Athletic Trainer Ruben “Doc” Alston in order to participate in practices and competitions.
Paperwork can be picked up in the high school office or in the high school field house athletic training room.
By Jerel Beaty
Staff Writer