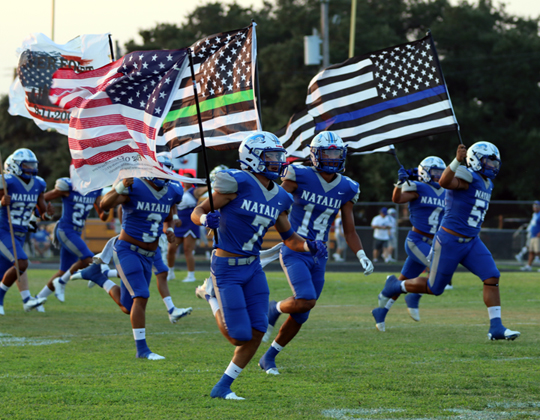 The Natalia Mustangs (2-1) and the Lytle Pirates (0-2) will square off this coming Friday at Walter Joyce Stadium for the 61st time in the history of the two teams dating back to 1933. The Natalia Mustangs lead the over-all series 32-26-3 as the boys in blue also hold a six-game winning streak vs. the black and gold. Friday night will also mark the 11th ever Legacy Bowl between the two programs and will mark the first game for Lytle Head Coach Adrian Trevino who took over the helm of the Pirates this season.
“We have some great young men in Lytle who are working hard to improve every day and are looking forward to competing this week,” Trevino said. “We are having a good week of practice and our kids are looking forward to Friday’s game.”
“I am really excited to be a part of another Legacy Bowl week,” Natalia Head Coach Ilyan Martinez said. “We have been fortunate to be successful here lately, but everyone is well aware that won’t help us win this year.”

Lytle Outlook
The Lytle Pirates who are a member of District 14-3A (Div.I) welcomed back five offensive and eight defensive starters from a season ago according to Dave Campbell’s Texas Football as they were coming off a 5-5 overall season that finished 3-3 in district just missing the playoffs under former Head Coach RT McConathy who is now coaching in Poteet.
Coach Adrian Trevino took over for McConathy, as he has started the season off 0-2 with losses to Poth 52-0 before watching their week 2 game get canceled since LaPryor and Brackett canceling due to COVID. Last week, Lytle lost another opponent to COVID before finding Skidmore-Tynan. The Bobcats were able to upend the Pirates 33-12. Lytle finished the game with 215 yards of offense including 107 rushing and 108 passing.
“We have seen a great deal of improvement in all three phases of the game, and while our first three weeks have been challenging, it has given our coaching staff a great opportunity to teach our team how to respond to change and press on. Our players have done a great job of buying into our new and emerging culture and we have seen the growth and development in each of our kids.”
Trevino was full of praise for his players.
“Senior Damien Garcia has made a big impact on both offense and defense, as has Junior Dustin Tumlinson,” Trevino said. “Freshman quarterback Luke Estrada entered last week’s game versus Skidmore-Tynan and played extremely well. Center/Defensive End Kasen Boyd has provided some experience and leadership up front for us, as has Senior Cort Haltom, Junior Austin Dubose and Sophomores Mario Diaz and Jacob Guevara.”
Natalia Head Coach Ilyan Martinez was asked for his thoughts on the Lytle Pirates and he had the following to say:
“Don’t allow Lytle’s record to fool you,” Martinez said. “Anytime Natalia and Lytle meet, it’s always a game. They are going to be ready and prepared to come at us with everything they have and it will be our job to make sure we play our best football Friday Night.”
Offensively, the Pirates are in a spread formation with a power run game.
“Their offensive line comes off the ball well and their RBs are downhill runners,” Martinez said. “They are physical and we will have to do a good job of getting off blocks to slow them down.”
Defensively, the Pirates run a 3-4 cover 4 according to Martinez.
“Daniel Aguirre is a very athletic Senior RB and they use him in a variety of ways,” Martinez said. “They want the ball in his hands and do a good job of creating opportunities for him to make plays. Their entire offensive line does a great job of coming off the ball led by senior center Kasen Boyd.”
“Their down-three linemen have great ball get-off and create some issues up front,” Martinez said. “They have two solid inside linebackers we will have to account for on every play. Their secondary does a great job of keeping everything in front of them. We will have to take what they give us.”
“Colton Haltom is their Senior NT and he has a great get-off and does a good job of making things tough on the center,” Martinez said. “Aguirre is also a LB for Lytle and has a nose for the ball and is very sound in his play. We’re going to have to get a lot of people on him to keep him off our backs.”

Natalia Outlook
Natalia welcomed back two additional backs to the game last week which allowed Natalia a lot of opportunities in the form of using various personnel on the field compared to the Cole game. Look for Natalia to most likely use a good mix of run-pass to try and attack the Lytle Pirates as they should be able to do both as long as the battle is won up front vs the Pirates.
In both Natalia wins this season, the battle was won starting with the play of the offensive line.
Vs. Cole, the Cougars found a way to frustrate the Natalia offense which hampered the Stangs in the first half resulting in the loss.
Turnovers have also been key in both victories for Natalia as the Stangs have forced turnovers in each of the three games so far this season which begins with a gritty defensive effort.
“We need to continue to improve this week and clean up some of the details from last week,” Coach Martinez said. “The goal this week will be to not get complacent and focus on improving the details that we know will make us a better football team. We will also focus on playing within ourselves and don’t allow other things we don’t control to affect how we prepare for Friday.”
A look back at the games since 2000
Since 2000, the two programs have only met 11 times. Natalia’s first meeting in the 2000s was in 2004-2005 when Lytle was able to win a 25-24 thriller at home over the Mustangs which was the first of five in a row to begin the Legacy Bowl era. In 2005-2006 the Pirates won again 23-14. That would be the last year for the next few, as vandalism done to school property canceled the games until the rivalry came back alive in 2012-2013. A look at the results from here on: 12-13′ Lytle 35-33, 13-14′ Lytle 41-13, 14-15′ Lytle 42-20, 15-16′ Natallia 19-6, 16-17′ Natalia 34-21, 17-18′ Natalia 30-3, 18-19′ Natalia 7-6, 19-20′ Natalia 63-10, 20-21′ Natalia 26-14.
11th Legacy Bowl is set
Be sure to come out early and get ready for a good ole fashion Rivalry Battle Friday Night at Walter Joyce Stadium between the Lytle Pirates and the Natalia Mustangs. Kick-off is set for 7:30 p.m. and ALL TICKETS MUST BE BOUGHT online through Lytle Athletics. Keep an eye out on BOTH school’s social media websites for the link.
Following the game, MVP Trophies will be awarded to one Offensive and Defensive MVP from both teams. The winning team will be awarded with the Legacy Bowl Trophy and the entire winning team will be awarded with Medals for the first time this season which is a new addition made possible.
We would like to thank the following sponsors for the 2020-2021 Legacy Bowl Scholarship Fund which raised over $10,000 for the four scholarships: Natalia ISD, Lytle ISD, A Bushel & A Peck, AGCM-Inc, Alamo Truck Accessories, A.R.W.S.C, Brown Chevrolet, Brush Country Reality, Bullpen Cattle Company, Chandelier Rose Boutique-Natalia, Chaparral Ford, Community National Bank, The Devine News, Garza Bomber & Associates, Hurley Funeral Homes, Joris Contractors, Mark and Trisia Kidd, LD Tebben Company, Leanna Mask and Family, Lytle State Bank, Lytle True Value, Medina Electric Cooperative, Morales Realty, Mustang Wash, New Specialized Public Finance, North Park Chevrolet, Manuel Saldana Construction, Security State Bank, South Texas Rangel Foundations, South Texas Trophies, Texas Sold Appraisal Firm, Texas Sold Brokerage, Tommy Joe’s BBQ, Vic’s Cocina, Wager Family, Walsh Gallegos Law Firm, The Karen Wheeler Family and also two local families who wanted to donate in memory of former Natalia ISD Trustee, Natalia Mayor and Councilwoman Gloria Vasquez along with former Natalia ISD Employee and life-long Natalia Athletic Fan Trudy Smith.
By Eric Smith
Staff Writer