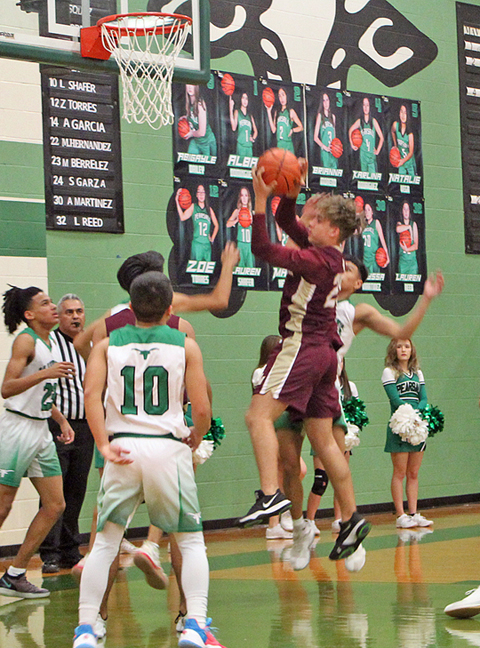 District is over for the Warhorses and they have come out as the district champions with an undefeated record. It was not an easy season for the team but they worked hard every game and put everything they had into every play. They were set to face Navarro on press night in the Bi-District playoff game in Floresville. The winner of that game will play either King or Port Isabel later this week.
In their final district game against Carrizo Springs, the Warhorses won 61-34. They came out strong and kept up the offensive pressure the entire game to end their season 8-0 and 21-9.
Ending the first quarter 21-3, Sergio Martinez and Kam Adams led with 5 points each while Dalton Kramer and Mason Burford each added 4. The Warhorses held up defensively in the second quarter only allowing Carrizo Springs 12 points while Kramer scored 7 of the Warhorses 11.
Adams led the Warhorses with four baskets and a free throw for 9 points 17-11 third quarter. When the game was over, Carrizo Springs fell 34-61, leaving them 1-7 in district play. “Another good defensive game for the guys. They came out focused mentally and it showed offensively and defensively.” Coach Paul Wells
Leonard Pompa 3, Kramer 17, Martinez 7, Burford 8, Adams 18, Justin Contreras 5, Colin Dishman 2, Xavier Contreras 1. Q1 21-3, Q2 32-15, Q3 49-26, Q4 61-34. FTP 43%.
Check out @Warhorsebball for playoff results!
By Dicy Chambers
Sports Writer