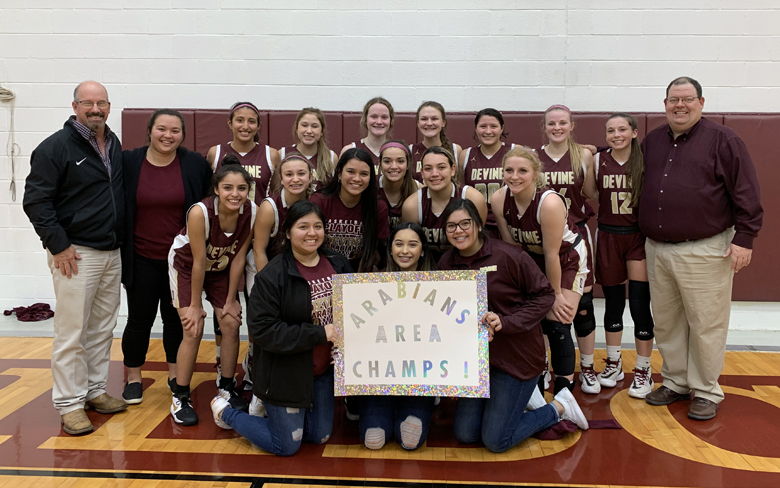 Click here for photos of the Arabians’ Bi-District win over La Vernia!

The Arabians ended two more teams’ play off dreams last week after beating La Vernia in the Bi-District game and Hidalgo in Area. The Arabians faced Beeville Jones last night in the Regional Quarter-Final Playoffs. Check out the Arabian Basketball’s twitter for the outcome @Devinearabians or @devnewssports
La Vernia took third in their tough district behind Navarro and Gonzales with an 8-4 district record and 26-11 overall. The Lady Bears have always given Devine trouble in the past and the Arabians were ready for a fight from the first whistle. Leading 20-8 at the end of the first, Devine continued to put pressure on the Lady Bears through the end of the half to lead 38-16.
The Lady Bears were playing aggressively but could not break past the Arabian’s defense who kept stealing the ball from them. Outscoring La Vernia 23-12 in the third, Devine continued to build their lead to 51-38. With the final score being 75-45, it was a very decisive win for the Arabians.
“We got off to a great start offensively in the La Vernia game. We came out in an aggressive mindset looking to score and we moved the ball well vs the Lady Bears. Defensively we did a real good job in transition and made La Vernia play in the half court. We were active on defense and we did a good job of rebounding vs a very athletic team. This was definitely one of our better offensive games of the season. We shot the ball at a high percentage and we did a great job on the boards and cleaned up some of our misses. We also did a great job executing on offense. I was very, very proud of the effort put forth by the girls in this game. They really played well and with a great intensity. It was a great win!” Coach Jim Sessions
Points: Lacey Shook: 4, Macey Hein 22, Megan Runyan 15, Maddie Mata 12, Clarissa Zamora 10, Ally Taylor 10, Janaee Wofford 2. Rebounds: Shook 4, Hein 5, Yessika Garza 1, Runyan 5, Kadence Yeats 1, Mata 3, Zamora 6, Taylor 4, Wofford 1. Assists: Shook 2, Hein 4, Runyan 2, Mata 5, Zamora 2, Taylor 2. Steals: Shook 1, Hein 5, Mata 6, Zamora 6, Zamora 2, Wofford 1. Blocks: Hein 1. Q1 20-8, Q2 28-16, Q3 51-28, Q4 75-45. FTP 65%.

Area Playoff Game
In the Area playoff game against Hidalgo, the Arabians had to work much harder to beat a team that swept their district and beat Robstown in Bi-district 36-31. Hidalgo was 14-0 and 24-5 over Rio Hondo, Port Isabel, Raymondville, La Feria, Zapata, Grulla, and Progresso.
“We did not get off to a good start in the Area game vs Hidalgo. In fact, we found ourselves down early in that game. We did a great job though of making some shots when needed to get back into the game. At a couple of points in the game we were down 8 points. This was mainly due to turning the ball over too often and allowing Hidalgo to get some easy transition points. In each case, we did a really good job of facing that adversity and fighting to close out the quarter strong so we could pull ourselves back into the game. We did this to cut the lead to 2 points at halftime. In the second half, we found ourselves down early in the 3rd quarter. We did a great job of once again fighting back during that quarter and this time we made some shots and took the lead late in the quarter and going into the 4th. We did a really good job of increasing the lead and then once ahead, we did a good job of taking care of the ball late. We made critical free throws late in the 4th quarter to seal the game. This was a very good win for the girls. I was super proud of the effort and fight shown by the girls.” Coach Sessions
Points: Hein 18, Runyan 8, Mata 8, Zamora 9, Taylor 6. Rebounds: Hein 5, Runyan 5, Mata 5, Zamora 13, Taylor 4. Assists: Hein 4, Runyan 1, Mata 3, Zamora 1. Steals: Hein 5, Zamora 1, Taylor 2. Blocks: Hein 1, Runyan 2, Mata 1. Q1 11-13, Q2 22-24, Q3 36-30, Q4 44-37. FTP 65%.
The winner of this game will play either Fredericksburg or Liberty Hill later this week. Stay tuned to social media for more play off announcements.
By Dicy Chambers
Sports Writer