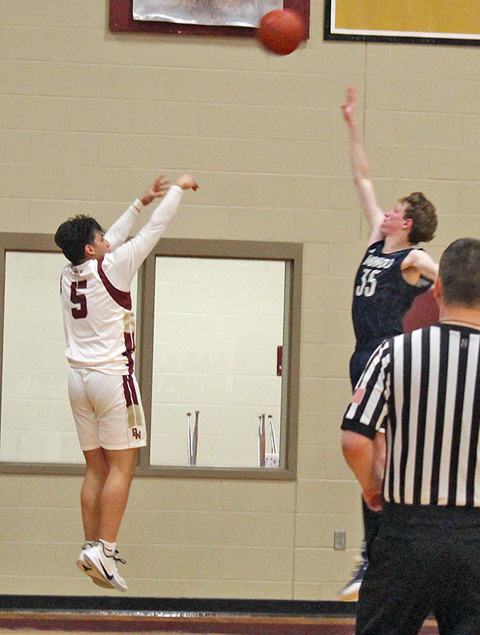 With the season winding down, the Warhorses have secured the district title. The last game of the season was played last night against Carrizo Springs and no matter the outcome anywhere in the district, the Warhorses are on top. “Kids put together one of their best games of the season. Great defense and rebounding was the key. Very aggressive on offense in getting to the rim. Very proud of these guys for their hard work and dedication.” Coach Paul Wells
In their last tough game of the season against the Hondo Owls, the Warhorses were able to take the lead in the first with 6 points from Dalton Kramer and 6 from Kam Adams. Kramer continued to sink shots in the second along with 8 from Justin Contreras to end the half 29-22. Hondo did not go away easy in the second half, they continued to put pressure on the Warhorse offense in the third. Contreras led the team again with 7 while Sergio Martinez had 5, and Mason Burford had 3. In the final quarter, Kramer sank a three pointer while Burford had 4 and Adams 2. The Warhorses won their 7th straight district game 55-41.
Dalton Kramer 17, Sergio Martinez 7, Mason Burford 8, Kam Adams 8, Justin Contreras 15. Q1 15-12, Q2 29-22, Q3 46-28, Q4 55-41. FTP 75%.
This big win puts the Warhorses in the top district seat at 7-0 and 20-9 for the season.
By Dicy Chambers
Sports Writer