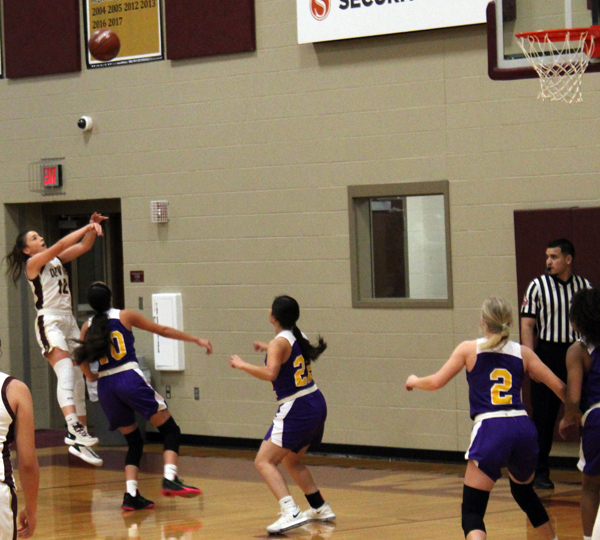 The Varsity Arabians took 2nd in district and then faced Cigarroa in a warm up play-off game. The team used the week between district and play-offs to work on drills and play an aggressive opponent to keep their game in top form.
Traveling down to Laredo to face the Cigarroa Toros, a 5A school, the Arabians came out of the locker room ready to win. They outscored the Toros 20-4 in the first and set an aggressive tempo to the game. “We got off to a really good start vs Cigarroa. We were very active on the defensive end of the floor and this led to some steals and turnovers. We got into our transition game early and we did a really good job of attacking the basket. We did a great job of keeping Cigarroa off the boards as well. We continued our intensity in the second quarter and finished the half out strong.” Coach Jim Sessions. The Arabians finished the half 34-8.
“In the second half, Cigarroa came out with more intensity. I thought we did a really good job of matching their intensity and increasing the lead in the 3rd quarter. We did a good job of closing the game out in the 4th quarter. It was a really good win for us going into the playoffs,” said Coach Sessions. The Arabians were outshot 8-16 in the fourth but they held onto the lead until the very end to win it 59-31.
In the first round of playoffs Devine faced La Vernia last night. Hondo faced Gonzales, Pearsall lost to Navarro, and Crystal City beat Cuero. Jourdanton lost to George West, Odem beat Dilley, Poth played Edna, Lytle Faced Skidmore, Cotulla faced Aransas Pass, Cigarroa faced Carroll, Somerset faced Edison, Kerrville Tivy beat LBJ Austin, Charlotte beat Junction, San Saba beat Stacey, Three Rivers faced Shiner.
By Dicy Chambers
Sports Writer