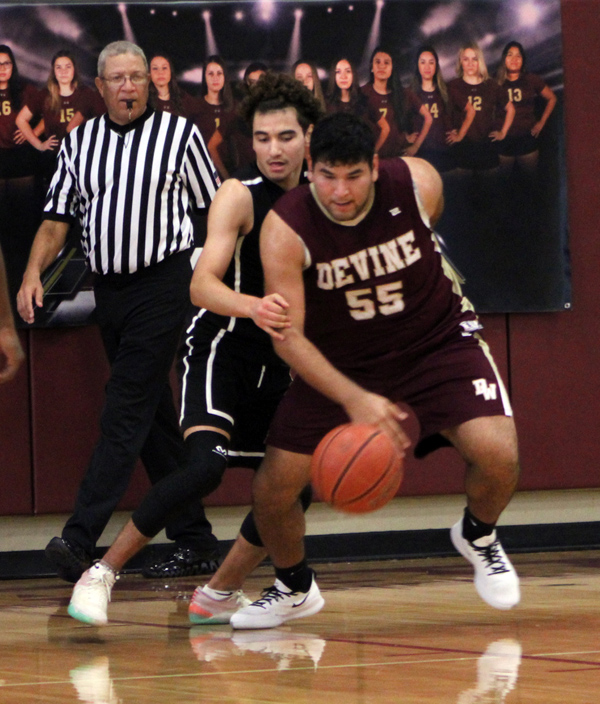 In their last game before the winter break, the Warhorses faced Bandera and won 74-52. Running their offense and making shots from outside the key, the Warhorses quickly found themselves on top of the score leading 21-5 at the end of the first quarter. Sergio Martinez scored 10 points in the first.
Coach Paul Wells’ team continued to put pressure on the Bulldogs in the second creating multiple scoring opportunities. Weston Byrd and Jose Dozel each sank three pointers this quarter to end the half 39-15.
The third and fourth quarters were a repeat of the first half for the Warhorses, they outscored the Bulldogs 20-13 in the third with Dalton Kramer scoring 7 and Kam Adams scoring 6 in the third. Going into the fourth quarter with a 59-38 lead, the Warhorses slowed the pace down and worked on their ball movement. They finished the game 74-52 and finished 9-5 before the break. The Warhorses “played solid defensively and did a good job of rebounding,” said Coach Wells
Kramer 16, Doezl 3, Martinez 15, Mason Burford 2, Byrd 8, Matthew Madrid 3, Adams 21, Justin Contreras 4, Andrew Perez 2. FTP 53%. Q1 21-5, Q2 39-15, Q3 59-38, Q4 74-52.
The Warhorses’ game against Buda Johnson was cancelled. Devine will play again December 30-31st in the Rockport Fulton tournament.
By Dicy Chambers
Sports Writer