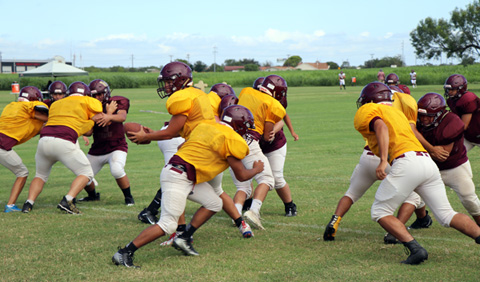 “What a great week for Warhorse football!”
Those were the first words from Devine Head Coach Paul Gomez’s mouth as he talked about the first week of two-a-days for his 2021 team.
“The boys showed up in really good shape, and not just a few of them,” Gomez continued. “Nearly 100% of players from grades 9-12 were ready to get started and coaches could tell that they had put in some work during their summer break.”
Gomez went on to compliment the effort levels of all three teams saying “the freshman players have given the JV great looks, and the JV consistently gave the varsity great looks as well. The boys are competing hard and getting better every day.”
The Warhorse offensive scheme is making a few changes this season, which has all of the players on their toes during individual position practice time. Whether they are the rookie freshman, or the most experienced senior, there is a new learning curve taking place daily.
“The players have done a great job learning the new terminology and learning our fast paced attack on offense and have retained a lot on our defensive scheme as well,” Gomez said regarding his players focus on both sides of the ball. “The practice time allowed by the UIL this summer really helped us on the defensive side as well.”
Throughout the summer, once players completed the strength and agility porting of the summer workout plan, many reported to the field to their position group. The time spent in the summer not only benefited the player as far as his abilities on the field, it also helped build trust in the system and trust in his particular coach.
The weather to begin the season has been more than beautiful. Cooler temperatures have undoubtedly helped keep the players tuned in during practices.
“We are working on getting tougher mentally and understand that they have to go full speed in everything that they do in practice to make that happen. It is good to see players in all positions taking it upon themselves to do everything they can to get better. I really like our mindset but we still have a long way to go and a lot of work to put in before we can be game ready,”
With teacher workdays now in session, the Warhorses have moved their practice time to 4pm daily. The 4pm start is the typical time the players hit the field during the school year.
By Jerel Beaty
Staff Writer