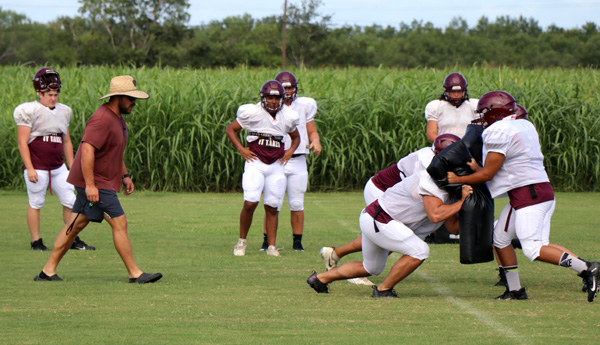 There’s a famous saying, or at least famous as far as the walls of the Devine Warhorse football coaches office goes, that a district championship cannot be won in the first week of two-a-day practices, but it can sure the heck be lost.
Early stages two-a-days consist of learning new terminology, new schemes, and getting players accustomed to a practice schedule different than that once school is back in session.
Players also have to adjust going from one position coach to another, which usually means increased expectations due to the fact the player is more than likely moving from one team to another or just the simple fact that the player is one year older and therefore should be one year wiser and stronger.
After one week of two-a-days in the books, several Warhorse assistant coaches commented on the progress they have seen from their players as they head into week number two and prepare for an upcoming scrimmage against Central Catholic.
George Villa
“I have four OLB’s in Mason Martinez, Marcus Rodriguez, Aiden Zapata, and Brandon Martinez and all have come in with great effort and attitudes. I really do not know who the starters will be come game one, and that is a very good thing for me because they are all doing good things.
As for our defense as a whole, we got better as the week went along. We had a challenge/goal every day for our team defensive period. On Saturday, we had a big goal line stand on the last play of the period. Our defense had its best day on Saturday hands-down. I think they are really starting to buy into what we are doing and trusting the process.
I also coach our varsity quarterbacks and we were short-handed this past week with only one (Samuel Guardiola) being available for camp. He has been outstanding with the way he has come in adjusted to the new offense. He has been a sponge and every day he gets better and better with his footwork and decision making.”
Scott Taylor
“Offensively, I currently only have two varsity split ends in Peyton Carr and Oswaldo Garcia. Both have worked very hard early in camp with a good amount of carryover from the routes run and passes caught this summer after strength and conditioning camp.
My two JV receivers, Sam Mills and Trinidad Hernandez, have worked hard and the four freshman split outs have done a good job, worked hard, and been receptive in learning during their time with me in pre-practice and the first 15 minutes of drills.
Varsity defensive end wise Jerod Fernandez, Kannon Ramirez, Aaron Bonilla, and Hayden DuBose are showing improvement daily in their recognition of blocks and are getting quicker at defeating those blocks. All four are quick and have good footwork. I am really looking for good things out of all the hardworking young men.”
Heath Poppe
“The varsity secondary is coming in way ahead of schedule scheme wise. Many of these guys came in over the summer and their knowledge of coverages and identifying routes has really improved.
I coach the JV running backs and quarterbacks. They have come into camp in great shape and are slowly getting back into the swing of things. Naturally, we have some guys in new positions that continue to learn their new role.”
Evan Eads
“My varsity running backs are Ethan Santos, Xavier Contreras, Gabe Esquibel, Nate Ramirez, Marcus Rodriguez, Aiden Zapata, Gus Puente, and Hayden Dubose. They are quickly learning new language, positions, motions, and plays. Their progress is better than I had expected to be at this point.”
I also coach JV and freshman linebackers. Richard Hernandez has performed well, as has Nick Ortiz. Although I do not know the ninth graders as well, their time will come. Our JV defense can get lined up and read well, we will need to improve our physicality. We need to attack.”
Bart Oropeza
“All four of my varsity tight ends are working hard to learn the plays and to execute their blocking responsibilities. I feel good about this group of kids and their work ethic.”
Devin Rotramel
“The lineman have reported to camp in great shape, looking forward to seeing more as season progresses.”
Jacob Sanchez
“Even though we have a small group of lineman on the JV they push each other every day to get better and all have been learning each other’s positions. I have a hardworking group of kids that just come to work.”
Joseph Sadler
“This past week was a good week with the freshman running backs and quarterbacks. With us going back to the old system somewhat on offense, there was a little bit of learning that needed to be done. The kids are handling it good and are getting better and better every day. All our guys are competing well and picking the new offense up quickly. This being my first year it is hard to say how much better they are compared to last year but I am happy with where we are right now.”
By Jerel Beaty
Staff Writer