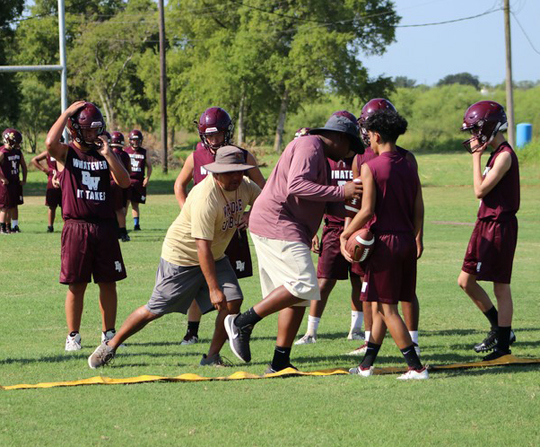 Eighty Devine Warhorse football players showed up for the first day of official workout this past Monday. Football season is the toughest grind no doubt but the pay off at the end of each season and the sense of accomplishment and satisfaction after the last game their senior year makes the pain, sweat, and tears all the more worthwhile.
Head Coach Paul Gomez shared thoughts on the first day of practice and his opening message to the team.
“We have 80 out to begin but would still welcome more. The beginning message was to always be doing what’s right which is preparing themselves mentally, physically, and spiritually for the journey of the 2019 Warhorse Football Season. We need to understand how important focus, discipline, dedication, heart, and effort is to achieving our team goals and that we are stronger together.
A quote the coaches like said, ‘As Individuals we are strong. Together, with God, We are Unstoppable”. I think that is as good of a definition of unity and togetherness that you can find.
Our goal for the next couple of weeks is to be as intense, as disciplined, as focused, and as dedicated as we can be to give perfect effort every day. Because those principles are what will be needed each Thursday and Friday night in order for us to have a great year. Understanding that staying together and having faith through good and bad times will only make us a better team and ultimately make us better people.
Never Give In and Never Give up! Our Warhorse Family is excited about this journey. We know it will not be easy but nothing worth achieving ever is. Let’s Go Warhorse Nation!”
Coach-speak
Special Team Coordinator Scott Taylor—“Very exciting first day. Kids were upbeat and worked hard. We were able to start quickly due to the carryover from skills camp.”
Defensive Coordinator George Villa—“I thought for the most part we showed great effort. At this point of the season, that is my biggest concern. Getting them mentally and physically capable of giving their best effort. We had a lot of retention from the spring from our returners. The ceiling is high. The fun part is getting there.”

Texas heat and what to eat
There’s nothing quite like the so-called “Texas-Heat”. It gets H-O-T, no doubt. The best way to prevent heat-related health issues is to begin a cycle of pre-hydrating the night before and the morning of a practice or game, continuing to hydrate during the event, and post-hydrating following the practice or game. There should never be a time of non-hydration.
Following a good dietary plan is important as well. Players are tired when they get home and mostly want to fall to sleep, that is a known fact. Eat first while rehydrating, then rest the body adequately.
If you aren’t sure what to eat or drink or what to stay away from, there is an article titled “Optimal Diet and Nutrition for Football Players” that you can Google to learn a few more facts regarding this topic.
Following simple guidelines will enable the player to have more quality practices, which will naturally boost overall performance.
First scrimmage
The Warhorses take on the Bandera Bulldogs in Bandera on Friday, August 16. This is the first scrimmage for each team. As official start times are locked down, check the Devine News weekly for updated information.
First game
The official start of the 2019 season begins Friday, August 30 in San Antonio against the Kennedy Rockets. The first home game is the following Friday against Somerset. Both games have a 7:30 pm kickoff.
Colts
Devine Middle School Colts should have physicals completed by the first day of school. It has been a long time since May so the excuses available for not having one are nonexistent. Be ready to practice on time with your teammates.
Come on out
Coach Gomez wants more players to join the football team. It is not too late to become a member of one of the greatest things the Devine community has going for it.
Get a physical, contact Coach Gomez (or any of the other coaches), and get to practice!
By Jerel Beaty
Staff Writer