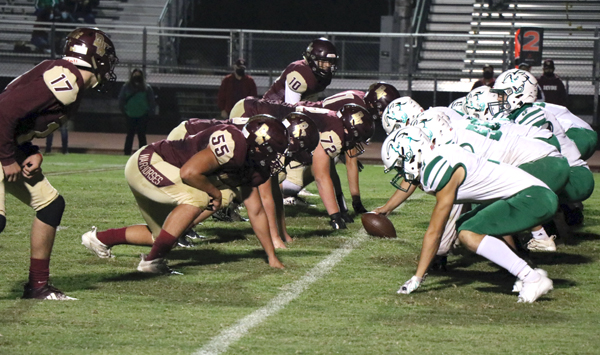 Although the Devine Warhorses fell a yard and a half short against Raymondville, Devine put up its best offensive numbers since the 2016 campaign. Likewise, on defense, the Horses registered four shutouts on the season including three in a row to close out district.
Devine’s offense racked up 4,935 yards which finished just below the 2016 squad who finished with 5,110 yards. Interestingly enough, even though the ’16 team had more offensive yardage this year’s team outscored them 451 (41.0) to 406 (36.9).
The Horses got off to quick starts scoring 146 points in the first quarter. As the game progressed, the scoring went down considerably (although blowouts in district ballgames is a big reason this is true).
Devine scored 140 points in second quarters, 100 in third quarters, and 65 in fourth quarters. In contrast, Warhorse opponents went 34 in the first quarter followed by quarters of 100, 54, and 33.
The rushing game totaled 3,978 yards of the 4,935 to account for 81% of the team’s total offense. Leading rusher Buddy Santos carried 164 times for 1,306 yards (7.96). He also scored 25 touchdowns via the ground game.
Quarterback Brady Hackebeil was the team’s second leading rusher with 112 carries for 1,227 yards (10.96) and 9 touchdowns. Justin Contreras, limited to five games due to an injury, rushed 52 times for 506 yards and five touchdowns. Had Justin been able to play all season, there is a great chance the Warhorses would have had three ball carriers with over 1,000 total yards rushing.
Passing wise, Hackebeil was 43 of 96 or 842 yards. He threw for 12 touchdowns while throwing only six interceptions. In limited action, Jaiden Burford completed 3 of 5 attempts for 115 yards and two touchdowns.
Mason Burford led the Horses with 23 receptions for 403 yards and six touchdowns. Mason had several clutch catches for Devine including the game winner against Uvalde in the second game of the season.
Buddy was the team’s second leading receiver with 8 receptions for 174 yards and four touchdowns. Aiden Zapata also broke the hundred-yard mark with 3 receptions for 121 yards and two touchdowns.
Devine defensive statistics are limited but the fact that they strung together three consecutive shutouts to close out district play says a lot about their focus to begin games during that time of year and it says a lot about the quality of the backup players that finished out many of those games. With big leads in the second half, the shutout-responsibility fell on the shoulders of many second and third team players.
After giving up 36 points to defending 2A State Champion Refugio in the season opener and 48 points a week later in Uvalde’s Honey Bowl, Devine’s defense settled in allowing only two teams to get to twenty points or more (Randolph 20, Carrizo Springs 21).
The one half the defense would like to have a redo on would be the second half against Hondo where they gave up 21 points after halftime. If they could do one quarter over, my guess it would be Raymondville’s 21-point second quarter that allowed the Bearkats to get back into a game that Devine led by 21 after the first quarter.
Devine’s defense did often hold their opponent in check giving up only 2,908 yards in 11 ballgames. While the Horses averaged 451 yards a game offensively, their defense allowed only 264 in return.
While the Horses defense played the run well, there were defensive lapses in their passing game coverage. Opponents threw for 1,459 yards, completing over 51% of their attempts in the process.
All in all, the statistical numbers amount to an 8-3 record which a lot of teams in the state could only wish to get that many victories in the season, while the Horses offense wishes it could have gained another yard and a half and their defense wishes it could have held one more of the Bearkats scoring drives in check.
Team stats
Rushing Buddy Santos 164-1,306 (8.0), 25 TDs; Brady Hackebeil 112-1,227 (11.0), 9 TDs; Justin Contreras 52-506 (9.7), 5 TDs; Hayden DuBose 13-272 (24.7); 4 TDs; Aiden Zapata 22-212 (9.6); Marcus Rodriguez 21-138 (6.6), 4 TDs; Nate Ramirez 26-121 (6.6), 1 TD; Gabriel Esquibel 18-91 (5.1); Ethan Santos 14-79 (5.6); Gus Puente 2-9 (4.5); M. Burford 1-4.
Passing Brady Hackebeil 43-96 for 842 yards, 12 TDS, 6 INTs’ Jaiden Burford 3-5 for 115, 2 TDs.
Receiving Mason Burford 23 for 403 yards, 6 TDS; B. Santos 8 for 174, 4 TDs; Zapata 3 for 121, 2 TDs; J. Contreras 5 for 95, 1 TD; Colin Dishman 3 for 83, 1 TD; Xavier Contreras 1 for 38, 1 TD; Esquibel 1 for 33, E. Santos 1 for 7; Hackebeil 1 for 3.
By Jerel Beaty
Staff Writer