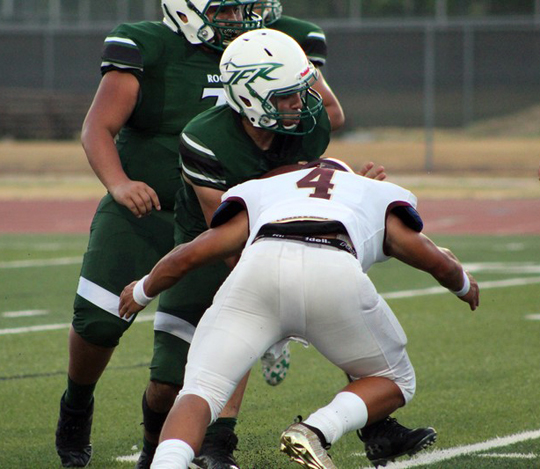 ‘Goose-egg.’ One of the oldest terminologies in all of sports signifying a shutout by one’s team against their opponent. A ‘goose-egg’ is exactly what the Warhorse defense recorded Friday against Kennedy. In Devine’s impressive 34-0 victory, much of the credit goes to the players who stepped on the defensive side of the field for the Warhorses.
Rotating many players in and out and allowing only 132 yards total offense against what was supposed to be a ‘much-improved’ Rocket’s offense says a lot about the effort put forth by Defensive Coordinator George Villa’s group.
Gomez elaborated on Devine’s defense. “The good thing is that although we missed three interceptions and had some mental errors, our defense has a lot of room to grow. As long as we have that same great effort, then we will be successful.”
Coach Villa obviously had a great game plan going into the contest and the players believed in it and executed it to near perfection. With coaches continuously stressing the importance of technique and effort, the payoff was phenomenal.
“The scoop and score by Sergio was a very exciting play that changed the whole game because Kennedy had a good drive going and were threatening to score so it was a big play for us,” Gomez continued. “Coach Villa’s defense strives to achieve team goals for each game. Against Kennedy, that unit accomplished six of ten goals which is impressive.”
By Jerel Beaty
Staff Writer