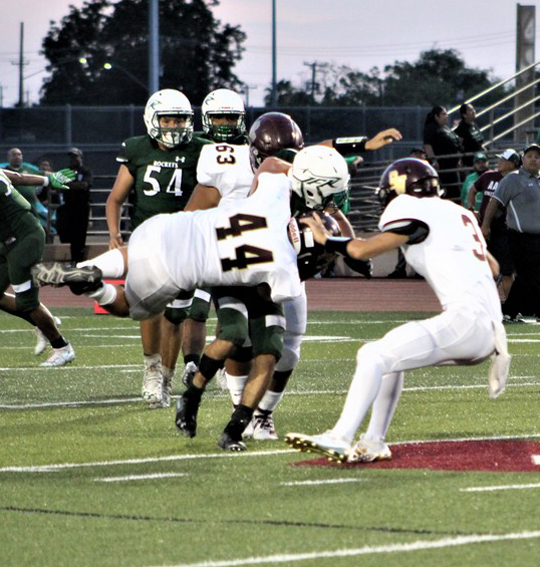 Not able to get ‘true repetitions’ during two-a-days or in either of the scrimmages against Bandera or Navarro, Warhorse Special Teams saw their first real-speed action Friday in San Antonio. Although there were several bright spots amongst the five different groups of special teams, there is still plenty of work to do going into this Friday’s kickoff against Somerset.
“We were a block away from breaking away for a touchdown on one of our kickoff returns, but our returner ran right into their kicker,” stated Special Team Coordinator Scott Taylor. “Our kickoff and punt teams graded highly, but our extra point team and kickoff team do have areas of needed improvement.”
Taylor was impressed with a Justin Contreras 68-yard kickoff return that set the stage for a Warhorse touchdown. He also complimented two near-blocked punts. The extra point team along with kicker Sergio Martinez converted one extra point out of three attempts, so that area is sure to be addressed in practice.
Head Coach Paul Gomez has no concern on what his special teams can do going forward saying
“Coach Taylor did a good job of putting our special teams’ package together, but we all know that players have to trust the scheme and have all-out effort and we did that for the most part.”
Gomez continued, “Our extra point kicking problems are an easy fix. Sergio just has to keep his eyes down through the kick and he will make that adjustment. We have complete trust in him.
Punt returns hurt us some but those are easy fixes as well. We just have to be smart on when to field a ball and when to let it go. Both Contreras and Mason Burford will improve on decisions of when and how to properly field a punt and I expect our punt returns to be much better this week.”
By Jerel Beaty
Staff Writer