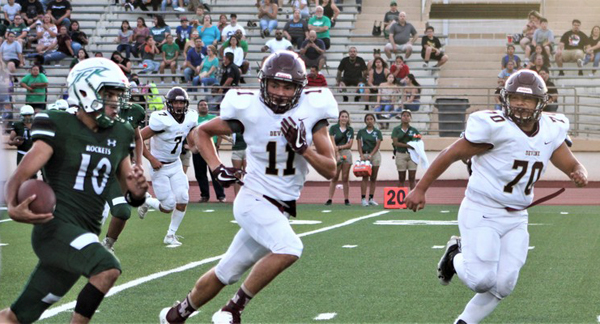 Veterans Memorial Stadium was formerly named Frank Mata Stadium. According to a gentlemen sitting next to Jimbo and I in the press box, in the old days, mid-70s or so, a running back by the name of Frank Mata played for Kennedy.
He was their best player during that time and he decided to join the military shortly after high school graduation. Killed during combat, the stadium soon after took his Mata name in honor of the school’s fallen football-hero.
As is the case today, political agenda’s played a huge role in taking Mata’s name off and making it Veteran’s Memorial just a few years ago. Parts of the stadium such as the press box and playing field have been remodeled over the last few seasons. It is a top-notch place to broadcast or to play.
“That field was awesome to play on. I’m glad we had a chance to play there.”—Coach Gomez
Shout outs
Big guys usually get no credit for all their hard and dirty work in the trenches. Well, you do here, Fellas. Coach Gomez named several offensive linemen (yes, in Devine, tight ends are considered linemen) whose contributions Friday night helped the Horses put 34 points on the board and cruise to victory.
John Schnautz, Jesus Hernandez, Geoffrey Seal, Aaron Rivera, Isaiah Rejino, Darrin Lafferty, Kaylob Nira, Tristin Kannard, Christian Robles, Andrew Perez, Jayce Hackebeil, Christian Gerlach, Jared Fernandez, and Joseph Hernandez—Gomez and The Devine News salutes you!
Game balls
I am going to award some “Game Balls” after Warhorse victories this season. Not actual game balls; that is probably illegal and even if it were not I do not have that kind of money lying around.
My first two “Game Balls” go to Sergio Martinez and Christian Gerlach. Offenses win ballgames but defenses win championships. It felt like Sergio and Christian were literally in on every defensive stop throughout the game, tirelessly giving a championship effort on every defensive snap.
Sergio was in the backfield wrecking their rushing game, while Christian was in constant pursuit of Kennedy’s fleeing quarterback forcing him into a 3 for 22 passing night.
Offensively, “Game Ball” recognition to the two-headed monster at the Horses used at quarterback. Isaiah Oropeza’s speed and quickness allowed him to gain 60 yards on the ground but he also passed for another 43. On a run early in the game, Isaiah lowered his head and plowed over some poor, Rocket defender which provided a big spark to an already smooth-running offense.
Brady Hackebeil got his first reps as a varsity quarterback as well. He hit some inside seams to net 53 yards.
Congrats to Oropeza, Hackebeil, Martinez, and Gerlach for achieving “Game Ball” recognition.
Looking back
Devine had a big moment on the old Frank Mata field in 2009, or around that time. Devine put 70+ points on the board against Poteet to wrap up a Bi-District championship.
“I remember the Poteet game very well. I coached the secondary at the time and I remember how Poteet’s running back eluded tackles most of the night to have a big rushing game for the Aggies. Coach Quisenberry never felt comfortable with our three-(even though most remaining Devine coaches believe it was four)-touchdown lead that we had most of the night so he kept piling on the points just in case. I’m glad he did, because I’ve seen some crazy finishes over the course of the last 40 years or so and I wouldn’t have wanted us getting beat to be one of mine and Devine’s career lowlights.”—Me
Team stats
Total yards: DEV 378, KEN 132; First Downs: DEV 17, KEN 8 Rushes/Yards/Avg: 40/318/7.95, KEN 23/115/5 Passing: DEV 5-8 for 60, 1 int; KEN 3-22 for 17
Individual stats
Passing: Isaiah Oropeza 3-5 for 43 yards, 1 interception; Brady Hackebeil 1-3 for 17 yards; Rushing: Justin Contreras 4 for 109, 1 TD; Oropeza 9 for 60, 1 TD; Hackebeil 12 for 53; Hunter Maxwell 4 for 37; Leonard Pompa 6 for 23, 1 TD; Buddy Santos 4 for 22; Sergio Martinez 1 for 14, 1 TD. Receiving Mason Burford 2 for 17; Xavier Contreras 1 for 26; Pompa 1 for 17.
Scoring summary
DEV—Isaiah Oropeza 2-yard run (PAT failed), 7:06, 1st
DEV—Justin Contreras 71-yard run (Oropeza 2pt run), 3:33, 1st
DEV—Sergio Martinez 69-yard fumble return (PAT failed), 10:42, 2nd
DEV—Leonard Pompa 4-yard run (2pt run failed), 3:40, 2nd
DEV—Safety, Kennedy recovered bad snap in own end zone, 3:49, 3rd
DEV—Martinez 3-yard run, (PAT failed), 2:30, 3rd
By Jerel Beaty
Staff Writer