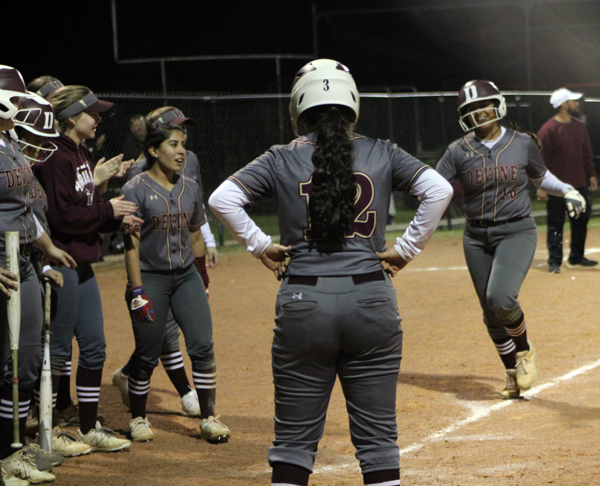 With the scrimmages over and pre-season games underway, the Arabians are now 5-1 for the season after a tournament in Kerrville. Coach Juan Gonzalez and his team are coming together for another winning season and are ready to make another great playoff run.
In their first preseason game of the year, the Varsity Arabians crushed SA Highlands 15-0 in four innings on February 20. Pitching for the Arabians was Isabella Gutierrez 4 innings pitched, 6 Ks, 2 walks, and allowed No hits, No Runs. The team had 15 hits and earned 15 runs.
“We hit the ball well tonight accumulating multiple singles and six doubles. Defensively we will fine tune run downs so that those two small errors do not happen over again. Jr. Mackenzie McClellan went 2 for 2 with one walk and 3 runs scored, and Sr. Isabella Gutierrez went 2 for 3 with three scored runs as well.” Coach Gonzalez
In the Kerrville Tournament on Saturday, the Arabians went all the way to the championship game before they lost earning them second place. In their first game against Berges, Gutierrez pitched 3 innings and allowed 3 hits but no runs, 2 Ks, no walks.
Offensively the Arabians scored 11 runs on 8 hits, 1 HR, 7 stolen bases. Sr. Halle Hagdorn went 1 for 1 with a 3 run HR, and a walk. Jr. Jeanette Rios scored two runs while going 2 for 2 with one walk and 2 stolen bases. “Another good game for us at the plate. We collected 11 runs off of 8 hits out of 15 at bats, 4 walks and 7 stolen bases. Sr. Halle Hagdorn hit her second HR of the 2020 season.”Coach Gohzalez
In the second game against San Angelo Lakeview, Devine won 16-1 with Gutierrez pitching 2 innings, 1 run off 2 hits, 5 Ks, and one walk and Mackenzie McClellan pitching 1 inning allowing no runs on one hit and 3 Ks.
The Offense Team had 8 hits, 6 walks, 6 stolen bases, and one homerun. McClellan went 2 for 3 with one home run and three runs scored. McClellan leads the team with 4 HRs this year. Jr. Arieana Ramirez went 3 for 3 with 2 singles and one double and scored 2 runs.
In a tight game against San Angelo Central Devine squeaked out a 6-5 win after 5 innings with McClellan pitching. She allowed 2 hits, 1K, 2 walks, 5 errors, and 5 runs. The offensive team had 6 runs off of 8 hits including a grand slam.
“This was a huge win for us. We were missing 3 starters due to powerlifting, so we had many players having to play a position that they do not usually play. We were down 5-1 in the bottom of the 5th inning with time expired so this was last chance, finish the inning time. With one out, we managed to get on base with a walk followed by two San Angelo Central errors to load the bases with one out. Jr. Mackenzie McClellan came up and hit a single up the middle to score one run. With bases still loaded, one out, Jr. #4 Mackenzie Schneider steps up and hits a walk off grand slam to put us up 6-5 for the win. This was one of the most exciting come from behind games I have ever been a part of. The Coaches and I are so proud of the girls for staying in the game and their will to fight their way back.” Coach Gonzalez
In the game against Boerne Champion, Devine lost by just one run. “We held the 2-0 lead up until the 4th inning. Giving up 3 walks, 2 errors, and a few wild pitches Boerne Champion found a way to get three runners across the plate before we made a pitching change. Jr. #44 McClellan came in to pitch to help get the final out of the game. Lesson learned that we cannot relax with any team when holding a lead. The errors that were made are fixable and we will learn from this game.” Coach Gonzalez
Gutierrez pitched 3 innings, allowed 3 runs, 3 hits, 5 Ks, and 3 walks. McClellan pitched 1 inning. No runs, no hits, 1K, 1 walk. Offensively the Arabians had 2 runs, 2 hits, 2 walks, 2 stolen bases. Jr. #44 McClellan hits her 5th home run of the season with one runner on base to put them up 2-0 going into the 2nd inning.
Finally against El Paso Chapin, Devine won 4-3 with McClellan pitching the game only allowing 3 runs. Devine had four runs on 8 hits and four stolen bases. Gutierrez and Mackenzie Schneider both went 2 for 2 in the game.
“We took another step in the right direction with this win. We were up 1-0, but then the top of the 3rd Chapin managed to string a few hits together to score three runs to take the lead. We responded with scoring three runs ourselves before the inning was over to take back the lead 4-3. Jr. #44 McClellan faced four batters in the top of the 4th to close out the victory for Devine.” Coach Gonzalez
This weekend the Arabians will compete in the Los Fresnos Tournament and then in Fredericksburg on Tuesday. They will play at home next Friday night.
By Dicy Chambers
Sports Writer