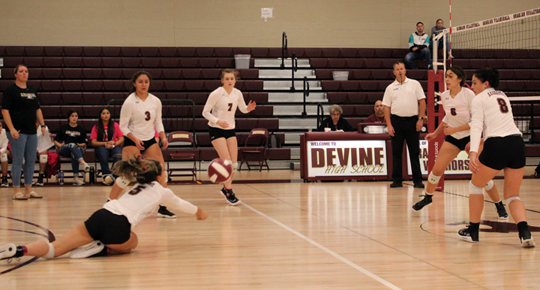 Devine remained undefeated in district as of Monday night. Tuesday’s game against Young Women’s Leadership Academy decided who would be district champions. Before the game last night, Devine was 5-0 and YWLA was 4-1. Fox Tech was 3-3, Somerset 1-4, and Brooks Academy was 0-4. Friday, Devine will play Brooks Academy and then finish district at home against Fox Tech on Tuesday, October 26th.
Tuesday night against Somerset “was not one of our best games, even though we walked away with the win. We had more unforced errors then we have had in a while and that brought our speed of play down. But we did pick it up during the middle of the second set and started playing more error free and more of the tempo we usually play. Just a few games left in district before we hit playoffs and we are going to have to work on our mental game more than anything in the next week and a half,” said Coach Leigh Anne McIver. Devine won in three sets at 25-16, 25-17, and 25-11.
Zoe Gonzales 3 kills. Avery Cruz 1 ace, 20 digs, 3 assists. Rylee Esquibel 14 kills, 1 ace, 11 digs, 1 assists. Bailey Oropeza 3 aces, 11 digs. Darian Alvarez 1 kill, 2 digs. Brooklyn Miller 5 kills, 4 digs. Macey Hein 3 kills, 2 aces, 1 block, 5 digs, 27 assists. Brianna Torres 1 kill. Aleyna Gerlach 3 kills, 2 digs. Skylar Blanton 5 kills, 1 dig. Cece Martinez 1 ace, 3 digs.
Friday night at home, the Arabians took on Holy Cross in a non-district game. They won the match in three sets and moved their overall record to 23-13. “This was a great win for us tonight, especially right before we play YWLA for the district championship. This game allowed us to play a little bit faster game, something we haven’t seen in a few games and what we will see in playoffs. I thought as a team everyone helped offensively and we made some great plays on defense,” said Coach McIver.
Cruz 32 digs, 3 assists. Esquibel 10 kills, 25 digs, 1 assist. Oropeza 12 digs. Alvarez 5 kills, 4 digs, 1 assist. Miller 15 kills, 8 digs. Hein 3 kills, 3 aces, 1 block, 19 digs, 42 assists. Gerlach 12 kills, 1 block, 3 digs. Blanton 4 kills, 1 dig. Martinez 1 dig.
Come out and support the Arabians in their last few district games or tune in on YouTube on Jim Sessions page.
By Dicy Chambers
Sports Writer