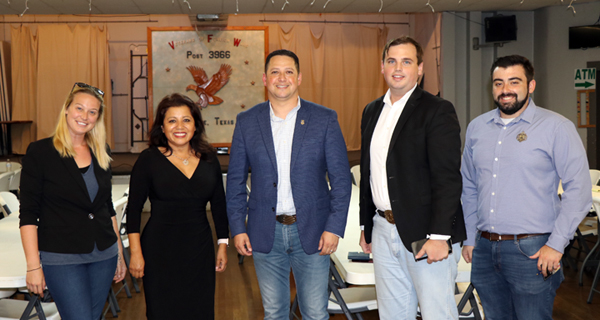 On Friday, July 2nd, the Devine Veterans of Foreign Wars (VFW) Post 3966 hosted a town hall for Congressman Tony Gonzales. Many local residents attended, including Medina County Judge Chris Schuchart, Medina County Commissioner Jerry Beck, and City of Devine Councilwoman Angela Pichardo, and City Administrator John Vidaurri.
Congressman Gonzales emphasized that border security is his top priority, as he represents 42% of the southern border. Members of the community expressed their concern over the numbers of migrants travelling through the local area. The Congressman acknowledged that the situation is “as bad as it has ever been.” He is not looking to assign fault but to just fix it. He encouraged people to stay vigilant about what’s happening and share information with local law enforcement: if you see something – say something. He is asking the federal government to declare a state of emergency for the southern border to open up federal resources to assist local governments. Congressman Gonzales encouraged people be vocal and get involved with their local community, whether through attending parent-teacher conferences at schools, participating in city and county meetings, and by voting.
The audience also expressed concern about the local economy not moving; polarization within the country; and support for the military. Congressman Gonzales stated that he pushes for bi-partisan collaboration but admitted there is the challenge given the Speaker of the House “ruling with an iron fist.” Tony’s focus is on delivering results for the 23rd district. He relies on the county and community leaders, as well as his constituents, to identify needs that he can address from a federal standpoint. He introduced the members of his San Antonio team and encouraged residents to contact his team for anything from veterans issues to identifying potential resources for local causes.
By Sandra Smith
Devine VFD SJA
Special to the News