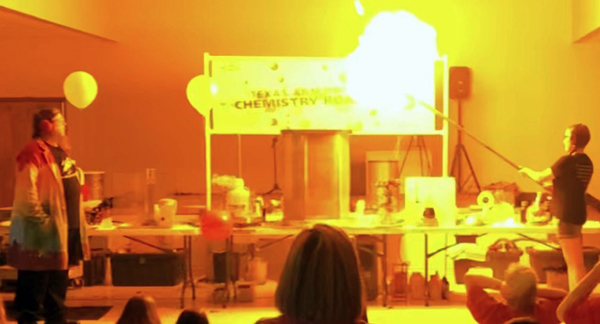 The Driscoll Public Library’s first summer entertainment in over a year started off with a literal bang thanks to a visit from Dr. James Pennington and the Texas A&M Chemistry Road Show last Wednesday.
Pennington, a chemistry professor at Texas A&M, has been on the go with the Chemistry Road Show for the past 13 years, crisscrossing the state to entertain and educate children with chemistry.

He treated the audience to more than an hour of chemistry-based entertainment, combining hydrogen peroxide and potassium iodide to create a foaming, bubbling reaction called “elephant toothpaste,” burning a hole through solid metal using magnesium and thermite, and mixing distilled water with a hydrophilic polymer to create “instant snow.”
Pennington even briefly plunged his bare hand into liquid nitrogen, a feat he was able to achieve thanks to the Leidenfrost Effect, a reaction caused by the difference in temperature between his skin and the liquid nitrogen that created an insulating vapor layer around his hand.
“You want to make sure that the science is the center of the show, that the science is really what the kids are getting out of it,” Pennington said.
The program came to an explosive end when volunteers from the audience helped Pennington use heat from an open flame to ignite balloons filled with hydrogen and a mixture of hydrogen and oxygen.
Both balloons exploded, and Pennington explained that the hydrogen balloon produced a larger fireball because it had to draw fuel from the oxygen in the outside air, while the balloon filled with the hydrogen/oxygen mix was louder and had a smaller fireball because it already had fuel to draw on.
Pennington said he focused on explaining the science behind his demonstrations at a level a bit above where children in the audience are at in school.

“Hopefully it stretches them a little bit, forces them to ask some deeper questions,” Pennington said, adding that children who want to dig deeper can utilize the library or online resources to learn more.
Head Librarian Debi DuBose was happy to welcome Pennington and the Chemistry Road Show back to the library for the first time since 2014.
“It was a treat to have Dr. Pennington return for our first library program since the pandemic,” DuBose said, “and it was wonderful to have kids and adults alike back in person.”
The Chemistry Road Show is presented as a free public service thanks Texas A&M’s Department of Chemistry and it’s College of Science Outreach Program, as well as by the Dow Chemical Company and Shell Oil Company.
The next library program is an educational mobile petting zoo presented by Happy Tails Entertainment on Wednesday, August 4.
By Marly Davis
Staff Writer