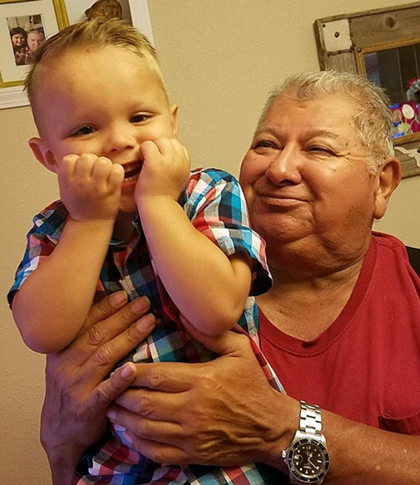 The family of Andres Morales,73, said goodbye to the loving dad, grandpa, and husband on Christmas Eve. Morales’ son stood as close as they would let him get, on the other side of a Covid Unit window, using Facetime with his mom and his sister in his daddy’s final moments. The family shared his battle with Covid in hopes that seeing what they went through that night and the weeks prior will “save someone’s life.”
The following story is submitted by his son Andrew Jr. and wife Denise Morales:
“People here aren’t taking this serious. I wish this on no one. It has been so hard to come to realization that he is gone. I’ve gone to Walmart and HEB and see people not wearing a mask, no social distancing seen houses full of cars to celebrating Christmas and New Years, it’s totally crazy.
“Dad was 73…He had high blood pressure, diabetes and was recently having issues with this kidneys and overweight, which were all controlled with medications.
“As far as where he contracted Covid we have no idea, my mother-in-law doesn’t really drive anymore so dad and was the main one running errands if I wasn’t able to do it for them. He would go pay all the bills and do the grocery shopping, pick up meds etc. He was a social butterfly he knew everyone here in Devine and everyone knew him and was liked by many. My father-in-law and my husband the only boy were the best of friends. My husband is a truck driver and gone sometimes 4-6 weeks at time. Dad and him would make it a point to spend all the time together they could. And dad would go drop off my husband at work and always with a breakfast before dad would drop him off at his big truck. My husband said there would be times that people would come up to him for a hand shake or a hug. Which of course my husband would get on dad and tell him to go wash his hands or use hand sanitizer and don’t be doing that because sometimes people are asymptomatic . So like I said we really don’t know where he caught it from.
“Dad started feeling sick on12/1/20 it started with diarrhea couldn’t keep anything inside. He would still try and eat a little something, soup crackers, broth but he just couldn’t hold it in. He kept saying it’s just a stomach bug, I’ll get better in a couple of days refused to go to the doctor. So by the 3rd-4th day he was so weak and had stopped eating. We could barely get him to drink anything but still refused to go to the doctor or hospital. No fever, shortness of breath no other signs. Finally on the 5th day he fell going to the bathroom he stated that he couldn’t feel his legs and was very weak, no color to his face just looked really bad. So we called EMS they showed up with the Devine Police and Fire department. They checked his vital signs low grade fever, blood pressure was normal, sugar was a little high but my mother-in-law gave him a piece of candy thinking it might be his blood sugar low, oxygen levels was good. I had asked the paramedics if they were able to give him a Covid test, and they stated that they didn’t have any. So dad being dad he refused to go to the hospital saying he felt better. He finally ate and drank a lot of water and Gatorade he started getting color back to his face. But then I noticed that he was getting incoherent and not responding to us anymore, just in that time my sister-in-law walked in. And she finally convinced him to go to the hospital. (I was the only one in the house wearing my mask). After he left I noticed that my mother-in-law was congested, she was very flush looking to the face. I asked her if she was feeling ok, she said yes, just fighting these allergies. At the time mountain cedar was high again and she struggles with allergies often. So I asked her if she needed anything she said no.
“Dad was taken to Jourdanton hospital and was taken in right away and doctors ran a bunch of tests, blood work etc. I asked my sister-in-law to make sure to have him tested for Covid. After a couple of hours, she called to update me and states that dad is real dehydrated and had already been put on an IV to start fluids. She also stated that he was in kidney failure and came back positive for Covid. The hospital didn’t have a kidney doctor on call that night, so they were going to transfer him to the Methodist Metropolitan hospital downtown San Antonio.
“On the morning of 12/5/20, my husband called Dad. Of course it was hard to hear him because they had an oxygen mask on him. He was in good spirits and told my husband “Mijo, don’t worry about me…I’m going to do fine and I’ll be home in a couple of days.”

“He stayed like that for a couple of days. We would talk to him by phone or Facetime him. Finally, like day 7th-8th would be the last time my husband was able to talk to him .
“Dad told Andrew my husband, “Mijo this virus is no JOKE. Please make sure you wear our mask and tell the family to do the same. I love you all.”
“Later that day dad was put on the bipap mask. The next day they sedated him and put him on the ventilator. They weren’t able to give him the Remdesivir due to the kidney issues. He was able to have steroids and convalescent plasma . By now, it’s like a little over 2 weeks in the hospital, and he finally started improving. They were able to lower his oxygen…they were waking him up. and he was able to blink his eyes to answer questions.
“Doctors and nurses are working endlessly on to try and help him. My husband would call 3 times a day, and sometimes, he was placed on hold for almost 2 hours. So if you are thinking you are going to get easy access and information on your loved one, you are wrong. Sometimes they would flat out tell my husband they were too busy to update him and he would need to try again later.
“At this point, they even started talking about moving him to a rehabilitation center. So we thought he was getting better and would be home very soon. Then one day my husband gets a call asking for DNR (do not resuscitate) for dad. My husband said no, if there is a chance he will survive, please do all you can do to revive him.
“A couple of days later my husband gets a call that dad has stopped improving. They told my husband that covid had done so much damage to my dad’s lungs that he would need to a tracheostomy tube and dialysis 3x times a week for the rest of his life. They told my husband that they would give him a week to make a decision on what we were going to do with dad.
“Christmas Eve my husband started calling the hospital his normal times, and no response which was weird, he would always get an answer, or at least told to call back. Finally around 8:20, we got ahold of the nurse and she said they were in the middle of a shift change and would have the doctor call him back asap. The doctor called back not even 5 minutes later, saying that dad had stopped responding to everything, his blood pressure was dropping, and the also his oxygen level…they didn’t think he was going to make it another hour.
“Andrew asked him if we could please go see him and be with him in his last minutes. The doctor asked how long it would take for us to get there. Andrew told him like 30-45 minutes. So we dropped everything we had in our hands, and I drove like a crazy lady to get my husband to his dad.
So we run into the ER and had our temperatures checked, and we were told that only my husband could go up since dad was in the Covid Unit. I gave my husband a kiss and told him to be strong and tell dad that we loved him and it was ok to go home. We were so proud of how hard he fought, and we knew he was tired it was ok to go home. We will all be together one day.
They escorted my husband to the unit and because he wasn’t in an N95 mask he wasn’t allowed to enter the room and hold his dad’s hand for the last time. So my husband had to stand in front of the window to see them pull out all the machines out of dad. My husband said his face was blue and purple from the mask . He Facetimed my mother-in-law and sister-in-law to see their loved one for the last time. No one should go through this!!! My husband was screaming and praying that dad knew that he was there, and that he loved him with all his heart and soul. He said I screamed so loud, “I wanted him to hear me.” How heart breaking is that? Dad finally took his final breath and gained his angel wings around 9:30 pm on Christmas Eve. He is now dancing with the angels.
“With a heart attack, kidney failure or other illness, you are able to be with your loved one…Go see them at the hospital anytime you can. Call and talk to them on the phone. We were blessed that we got to talk to dad a couple of times, by FaceTime . Do you really think you’ll be okay with seeing your loved one die alone, by FaceTime? And just because you think social distancing, masks are dumb??
“I want to stress that I was in the house that night dad was taken to the hospital, with my mask on, and I did not get it. Masks do work, I always wear my mask no matter what.
“I pray and hope that our love ones story will touch someone and make them a believer and save someone life.
Denise and Andrew Jr Morales