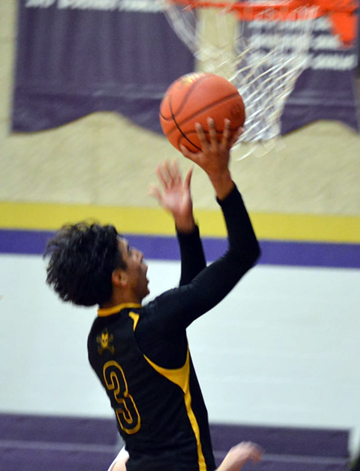 The Varsity Pirates ran the score up against the Navarro Panthers, controlling the game from the moment they stepped on the court. This was the Pirates’ first game and they started their season off with a big 99-51 win.
“The Pirate defense was relentless pressuring the Panthers to play out of rhythm and into their fast paced style of play. The defense held the Panthers to only 3 points in the first quarter and didn’t allow an actually made basket until the 6-minute mark of the second quarter. Offensively, junior Jaelen Guevara opened the season with a career night of 41 points, 6 rebounds, and 3 steals. He showed out in the second quarter, scoring 12 points. He wasn’t done yet, and in the fourth quarter Guevara took over the game, scoring at will on the Panthers’ defense, adding another 16 points. Junior Jordan Balderaz had a double-double with 17 points and 12 rebounds. Senior Matt Sanchez had a quiet 16 points, 4 rebounds, and 2 steals. As the buzzer went off, I couldn’t be prouder of the team. They focused all their attention on the defensive part of the game plan for 32 minutes, and it was impressive,” Coach Jacob Hernandez said.
The Pirates faced Stockdale last night and will be at home to take on Crystal City this Friday with the game starting at 5:00. Next week they will face SA Christian and Fox Tech. Both games are at home.
By Dicy Chambers
Sports Writer