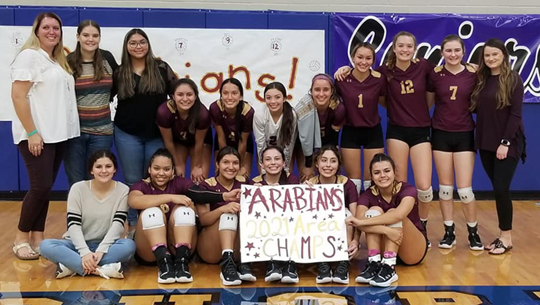 The Arabians’ season ended on November 9th at the Regional Quarter Finals. They faced Calallen and after three tough sets, Calallen moved on to face Needville. All of Devine is proud of the Arabians and the team had a great turn out at George West and on YouTube.
The Arabians had another impressive season which ended 28-14 with the District, Bi-District, and Area titles. They played hard in every game including their last. The front row faced several strong Calallen hitters and the back row had to work hard to keep up with the digs.
Coach Leigh Anne McIver is proud of each and every one of her players.

“Tonight was just not our night. Calallen came out and had their best game of the year and we were just struggling offensively at times. There were moments that we did some great things, but other times we would make a simple error. We just could not get on a steady rhythm of playing. But we have nothing to hang our heads down about. We had an awesome year and each player grew so much,” said Coach McIver.
Avery Cruz 17 digs. Rylee Esquibel 7 kills, 1 block, 8 digs. Kristina Moralez 2 aces, 6 digs, 1 assist. Bailey Oropeza 5 digs. Darian Alvarez 2 kills, 1 dig. Brooklyn Miller 7 kills, 2 digs. Macey Hein 3 kills, 1 ace, 5 digs, 28 assists. Aleyna Gerlach 8 kills, 1 block, 6 digs. Skylar Blanton 4 kills, 1 block. Cece Martinez 1 dig.
The Arabians will be back even stronger next season and look to get past the regional quarterfinals.
By Dicy Chambers
Sports Writer