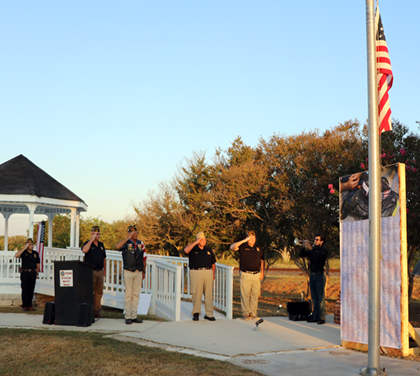 A ceremony, led by Chris Clouser- Jr. Vice Commander VFW Post 12041 and VFW members Ed Marcin and Steve Trouft, Chaplin and Lytle Mayor Ruben Gonzalez presented the Ceremony on Saturday, September 11th at the Memorial at the edge of town.
On behalf of the Veterans of Foreign Wars, Post 12041, the great City of Lytle, TX, and its police and fire department, Clouser welcomed attendees to the Patriot Day Remembrance Service for the horrific events of 9/11 that took place 20 years ago today. He thanked all for attending the service and invited them to visit the special 9/11 memorial after the service that was designed and constructed by the Lytle High School Digital Design/Skull studio and Agriculture department.
“Across the country, and the world, we pause today to remember those thousands lost on this day 20 years ago during the attacks of 9/11, the thousands that are suffering and have died since 9/11 from injuries and illness resulting from the response to the attacks and the families that lost loved ones; thousands more parents, spouses and children,” Clouser said.
“And to recognize and thank our first responders, police, fire, emergency services; our military service members and veterans, and government officials here and across our community and country that continue to serve, protect, and defend us” he continued.
“On this day, the President requests that the American flag be flown at half-staff at homes, and on all U.S. government buildings” Clouser said in his address. “The President also asks Americans to observe the moments of silences, and to make this day a “day of service” to our country and communities. I would like to thank our special guests Congressman Cuellar Aide Maggie Moralez, Mayor Ruben Gonzalez, First Responders, Emergency Services, and our Police and Fire departments.
VFW Post 12041 Chaplain Steve Troudt, led a prayer, then the National Anthem and Taps were played, followed by a moment of silence at 8:46 a.m. when the coordinated attacks first began. 1st airplane struck the North Tower. The Lytle Volunteer Fire Department rang a bell five times, one each for a minute recognizing the attacks on World Trade Center North Tower, South Tower, Pentagon, Flight 93/Shanksville, Pennsylvania, and honoring First Responders.
Mayor Ruben Gonzalez also offered a few comments on the occasion and Post 12041 Ed Marcin made some closing comments then Chaplain Steve Troudt closed the ceremony with a prayer.
“In closing, as we mentioned, today is also a day of service, and we invite you to commit to volunteer at any of the numerous and worthy organizations across our community,” Clouser said. “September has also been declared National Disaster Preparedness month across the United States.
“As we leave today and return to our homes, schools, and work, I’d ask you to ask yourself: What would I do? How can you prepare to protect ourselves, families, friends, and neighbors?
“From checking and installing smoke detectors, to taking first aid and CPR classes, there are many resources to help guide you and things we can do to be prepared and assist our government and first responders in before, during, and after disasters, to help reduce the impact and to literally save the lives of those around us. The key, like our first responders, is to know what to do.
“Thank you for joining us today.
“Always Remember,” he concluded the ceremony.