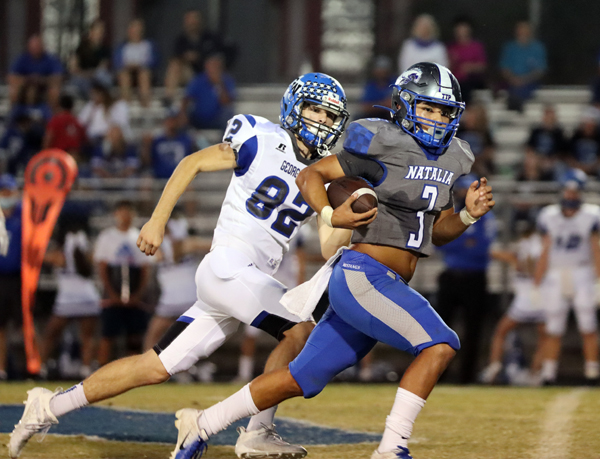 The Natalia Mustangs (3-2, 2-1) and the Odem Scrappin Owls (3-2) will square off Friday Night in San Patricio County for their first meeting since the 2002 Area Playoff game in Robstown. Natalia is coming off a big up-set victory over former #21 George West, as the Owls knocked off a struggling Santa Gertrudis Academy (Kingsville) squad 33-0.
Odem Outlook
The Odem Owls compete in District 16-3A (Div.II) where they have won five out of their last six district titles and are picked by Dave Campbell Texas Football to do so again this season.
“Odem is historically a good team,” Martinez said. “They are big and physical with a couple of guys who can make some big plays.”
Looking at the schedule for Odem so far this season, they started off with a low scoring loss to Ingleside 18-14 before falling to a very good Orange Grove squad 62-21. The Owls have since, reeled off wins vs. West Oso 25-9, Karnes City 31-20 before last week’s victory over the Lions.
According to Coach Martinez, the Owls base their offense out of a 2-back-gun similar to Natalia and will run an odd-front with a cover 4 secondary on defense.
Odem returns seven starters back on both sides of the ball from their squad that finished 8-3 a season ago.
The Owls are led by Sophomore QB Hunter Dawson who has thrown 24-46-436 yards-4TDs-4INTs on the season.
When Odem throws the ball, Dawson likes to look for junior WR Kyle Castaneda who wears #4 on the field. He has seven receptions for 204 yards and 3 touchdowns thus far. Austin Dominguez is the only other Owl receiver with over 100 yards thus far as he has 6-145-4 TDs thus far.
Dawson also leads the rushing department for Odem with 92-385-3TDs as junior Mark Moreno has 47-303-1TD thus far.
Defensively, junior LB Noah Ramirez along with junior DL Eli Pizana lead their defense according to the Natalia coaching staff.
Note: The 2002 Odem squad that ended Natalia’s season in the Area Playoffs was ranked in the top-10 in the state and went on to the state semi-finals before losing to Corrigan-Camden.
Natalia Outlook
Last Friday night, the Natalia Mustangs showed they are truly a two headed monster on offense when the war continues to be won at the line of scrimmage. Having the ability to be effective with a pass when needed and a run when needed is always nice.
“We are going to have to put together another solid game plan for Odem,” Martinez said. “It will be another physical football game for our team and we are excited about the challenge.”
One of the big differences Friday night was the fact that Natalia only had three penalties all night long which was nice and truly helped to not play behind the chains. Natalia was also 100% with PATs and Field-Goals which is always a huge plus.
Going from district competition three weeks in a row so early, back to a non-district game, will be a first in program history. The bottom line is, it is 2020 and as we saw two weeks ago in Stockdale, anything is possible!
Friday night will be a good road test for Natalia and their toughest of the season. Odem Owl Stadium (pre-Covid 2,700 capacity) will be the site for the big non-district battle many in South, Texas will have their eyes on.
Tickets for this game will go on sale Wednesday on www.odemathletics.com and you must buy tickets ahead of time for the game.
“We need to stick to who we are and be the physical football team we can be in order to be successful,” Martinez said.
Game set
The Natalia Mustangs and the Odem Owls will square off at 7:30 p.m. Make the 2-hour trip South, pack the stands with Natalia Blue and White and let’s make it a rowdy road atmosphere like Stockdale, but with a different outcome when it is all said and done!
Live Broadcast: Odem will have the game on live broadcast from Rio Sports Live which is available on Facebook, Twitter or on their YouTube Channel.
#GoBlue #TTP #BeatThoseOwls
By Eric Smith
Staff Writer