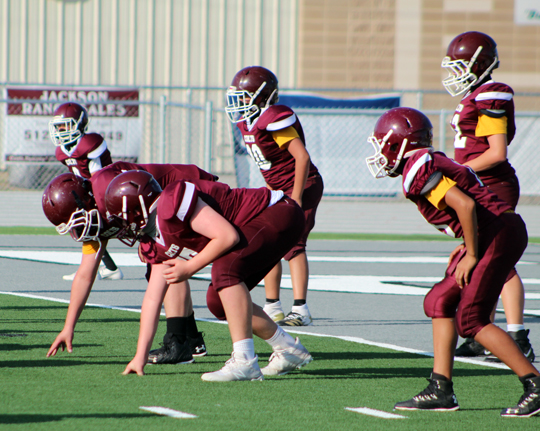 The seventh grade Devine Middle School Colts won their second ballgame on the young season to improve their record to 2-1. The Colts were down six-to-nothing going into the halftime break but took the lead on a Mario Vicente yard run. Karter Brown converted the two-point conversion on a quarterback keeper play to put the Colts up by the winning margin of 8-6.
Luling took a lead on a 29-yard pass completion that the back took up the Eagle sideline for their only score of the game. The big difference in the game is when the Luling quarterback tried to convert a two-point run, the Colt defense stopped him cold.
The Colt deficit was six going into halftime, but it only took 0:28 seconds for Devine to tie it up. After the Eagles kicked off to start the second half, Mario Vicente took the handoff and sprinted 62-yards to tie the game momentarily at six apiece. Brown scored on the two-point run to put Devine up by two.
Devine’s defense had a big stop with 4:46 left in the game. The Eagles worked their next possession all the way down to the Colt 8-yard line but Luling could not convert a 4th and 8 from the eleven.
Up next
The Colts kick off against the visiting Refugio Bobcats Thursday at 5:00pm.
By Jerel Beaty
Staff Writer