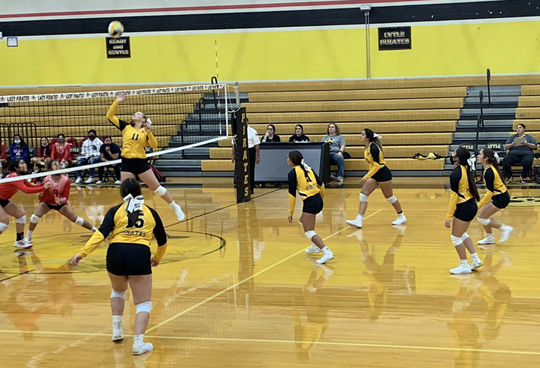 The Lady Pirates took on two district opponents last week and after winning both matches they improved their district record to 3-5 and 5-12 overall. Lytle has a bye on Tuesday and will face Poteet in Lytle on Friday October 1st. Nest week they will face Karnes City and then Poth.
Beating Cotulla 25-22, 25-22, 25-16, the Lady Pirates came out strong and stayed focused all three sets.
“With one of our main setters out, Elysa Aleman, due to a knee injury, our Pirate team stepped up to the challenge. Lopez, filling in for the injured Aleman, returned to the position she played since middle school and played it well. Our scores were close in each set but the Pirates came out victorious, beating the Cowboys in three sets. They are starting to believe in the process and continue to make improvements,” said Head Coach Denise Cordero.
Pirate of the Game was Chelsea Gonzalez with 4 aces, 4 kills, 1 solo block, 3 digs. Player stats: Marissa Lopez 1 ace, 7 kills, 9 assists, 5 digs. Amelia Martinez 4 digs, 1 kill. Alyssa Sprenger 1 kill, 1 assist, 9 digs. Alyssa Montalvo 1 ace, 1 kill, 5 digs. Kaylee Diaz 2 kills, 1 solo block, 4 digs. Skye Granato 3 digs. Fizz Hutton 2 aces, 9 kills, 4 assists, 19 digs. Rose Scotello 1 ace, 7 kills, 14 assists, 6 digs.
Friday night, the Lady Pirates took on the Cougars from West Campos. The game did not start in favor of the Pirates and after a quick time out, the Pirates turned it around and played as a team “and with a couple of ace serves from Gonzalez and Lopez, as well as some hits from Diaz, Hutton, and Scotello, our Pirates won the first set 25-12. On to the second set, our Pirates started slow again with the first rotation ending with each girl serving only once. West Campus took advantage of our serving errors and added points on the board for them. Pirates won set two 25-19. The Pirates struggled with communication; we started the third set with more energy and confidence with great serves, sets and hits from Gonzalez, Scotello, Hutton, Diaz, Granato. The passing game to our setter has been improving daily and we were able to help our setter make some great sets and our hitters were able to find the holes and win some points to secure the third set 25-15,” reported Coach Cordero.
Pirate of the Game was Marissa Lopez with 6 aces, 1 kill, 1 assist block, 5 assists, 3 digs.
Player Stats: Granato 1 kill, 8 digs, 1 assist. Sprenger1 kill, 1 assist, 3 digs. Montalvo 1 kill, 8 digs, 1 assist. Gonzalez 4 aces, 3 kills, 2 digs. Diaz 1 aces, 2 kills, 2 aces, 10 digs. Hutton 4 aces, 7 kills, 1 asst block, 11 digs. Scotello 2 aces, 8 kills, 8 assists, 6 digs.
Ending that tough match with a win closed out the first half of district with back to back wins which will help the Pirates momentum as they continue to compete in the tough district. Coach Cordero invites every one to the home game against Poteet on Friday.
By Dicy Chambers
Sports Writer